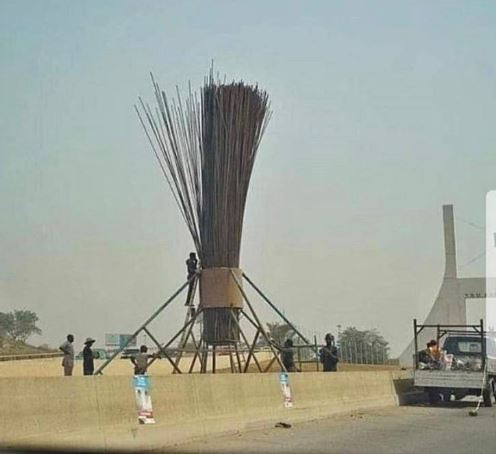 Nigerians have taken to theif social media accounts to express disappointment over the construction of a giant broom in front of the Abuja City Gate by the All Progressives Congress (APC).

Among those who reacted to the massive broom are some chieftains of the Peoples Democratic Party (PDP).

See some of the reaction below:

.@ProfOsinbajo: Sir, Nigerians say we can’t point to a single project initiated, started and completed by our administration in the last 4 years.@MBuhari: Osunbade, ask them to go and see the big broom at Abuja City Gate.

They have erected a giant broom at Unity Park near Transcorps Hilton in the centre of Abuja and another one directly in front of the city gate.The broom is the symbol of the ruling APC and a symbol of witchcraft.They are invoking dark forces to stay in power but they will fail.

Attention: @GWR This is the Largest Broom anybody or group has ever erecting anywhere in the world. This is work of some group of volunteers of @OfficialAPCNg . It deserves your recognition and honour

Why are you people complaining because of this ordinary broom at City Gate?

From tomorrow, helicopters will be flying all over Abuja and dropping brooms on everyone's roof.

I hope @OfficialAPCNg is okay ? How do you erect your party emblem in front of a national monument like the Abuja city gate? PDP never tried this rubbish in all their 18 years in power. pic.twitter.com/6GpTFbXelF

Just 1 week to the general elections, the failed @OfficialAPCNg led federal government has erected a statute of a broom at the city gate in Abuja. This is shameful and ridiculous. It’s now clear that he whom the gods wants to destroy, they first make mad. Vote @atiku pic.twitter.com/3hiVllrcWL

Erecting the symbol of APC in front of the Abuja city gate to say the least is impunity taken too far. Is @OfficialAPCNg logo/symbol same as Nigeria's symbol? @OfficialPDPNig spent 16 years at the centre but did not desecrate Nigeria's identity and unity. pic.twitter.com/w23XVGT9qq

The APC has littered every part of Abuja with Buhari posters and Bill board, the pressure is so high @YemieFASH pic.twitter.com/kvdsttEDhg

If this broom was in Port Harcourt, a bonfire would be happening right about now.

"@citizensspeakn: Wonder what this government is turning the country into. Imagine, they are busy erecting
a big broom at Abuja City Gate. Maybe Nigerians should ask them what that stands for and why? @Gidi_Traffic pic.twitter.com/x93r4FFP0W

The statue is in honour of his legendary Incompetence #BuhariMustGo pic.twitter.com/C7WuVXAXwc

Just drove past the installation of a giant broom, the symbol of the ruling party, near the Abuja city gate, a national monument. This shouldn’t be allowed for whatever reason. Cc @ProfOsinbajo @MBuhari pic.twitter.com/FsRxO87OsA

While Ghana is pushing new frontiers of development. Nigeria under the rudderless leadership of General Muhammad Buhari, is so bereft of ideas that it is the mounting a N230m broom at the Abuja gate dat is paramount. You better vote for @atiku. These ones are totally lost. #LGNWA pic.twitter.com/seu0cAKvPb

Well Abuja is a high tech city in a low tech kind of way, so when you enter town on that 8 lane super highway, you know you have arrived when you see giant broom at the gate ? 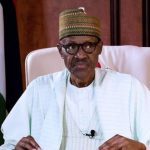 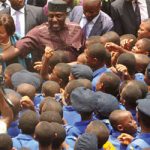