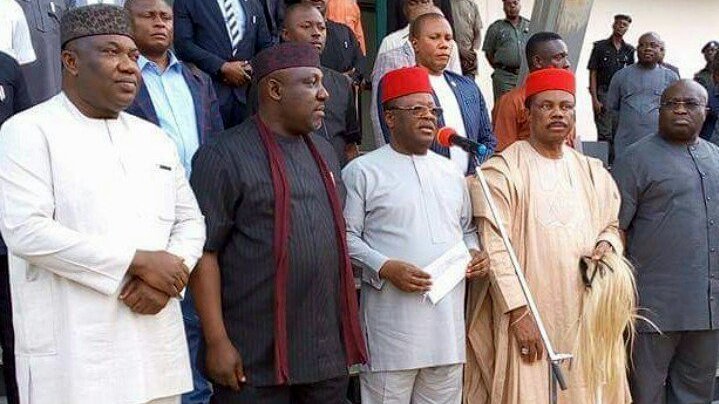 The South-East Governors’ Forum has reacted to the controversial call by the Miyetti Allah Cattle Breeders Association of Nigeria (MACBAN), for the establishment of Fulani Youth Vigilante body in communities of the South East.

Miyetti Allah had proposed an establishment of Fulani Youth Vigilante group in Southeastern region that will be working with the security or the neighborhood watch to ensure security in all communities.

However, the South-East Governors’ Forum has denied ever being ready to allow such suggestions come to fruition in the zone, describing the proposition as a joke.

Governor Dave Umahi of Ebonyi State and Chairman of the forum in a statement released by his Chief Press Secretary, Mr. Emmanuel Uzor on Monday in Abakaliki, described claims of the governors allowing MACBAN to form vigilantes as strange. The statement reads:

“I find it extremely strange for anybody to think that non-locals in any part of the country, including the South-East, could be allowed to form vigilante outfit. The Miyetti Allah group may have made that suggestion, which I believe will never mean to form a vigilante in South-East.

“Whichever is the meaning, no governor will allow that. South-East governors have their local vigilantes working with security agencies. Any such demand by Miyetti group is a joke and not acceptable.

“Governors of South-East are doing their best and we have no problems receiving insults from our people. It is the price for leadership. The important thing to us is the safety and well-being of our people.

“There will be no Miyetti vigilante, no cattle ranch or colony in South-East. But we must live peacefully with herdsmen that do not destroy our farmland, especially those that were born here and have lived peacefully with us.

“All South-East governors are together in this position.”

He maintained that South-East would not allow any Miyetti vigilante in any part of the zone, neither would it allow cattle ranch nor cattle colony.

“My Father Disvirgined Me, And Has Been Sleeping With My Sisters For 9 Years” – 16yrs Old Victim