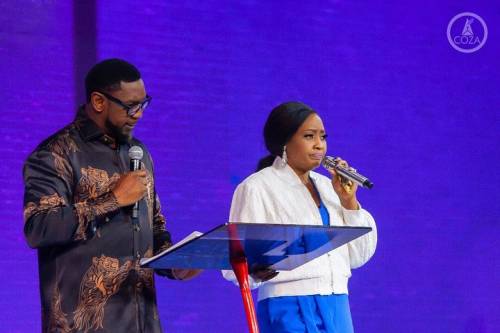 Modele Fatoyinbo, the wife of the embattled founder of Commonwealth of Zion Assembly (COZA), Biodun Fatoyinbo, says nobody can replace him either as her husband or pastor of the church.

She spoke hours after the pastor announced that he had stepped aside based on the rape allegation Busola, wife of Timi Dakolo, Nigerian singer, leveled against him.

Busola alleged that the pastor sexually molested her twice within a week when she was a minor, several years ago.

The COZA pastor, however, denied the allegations and threatened to take legal action against the Dakolos.

Speaking at the church on Monday, Modele asked her husband to clear his mind of all doubts.

According to PUNCH, she told the congregants that Fatoyinbo remained their pastor despite the rape allegation.

“Pastor doesn’t want me to talk. It’s fine. I just want to say ‘we love you’. You are our pastor; nobody can take your place,” she said.

“We have strangers in this house — strange sons and daughters. But God will close the heavens over them in the name of Jesus.

“It’s always good to assure people that you love them, not only when you feel that everything is fine with them, even much more when you feel that they are not. You know your friends when you are in trouble. So, we don’t want you to doubt in your heart. As for Modele, until I see Jesus, my surname cannot change. So, you better calm down.

“Nobody on earth can take your place in our lives.”

“2019 Election Is Behind Us, Nigerians Have Spoken, We Won’t Disappoint Them” – Buhari