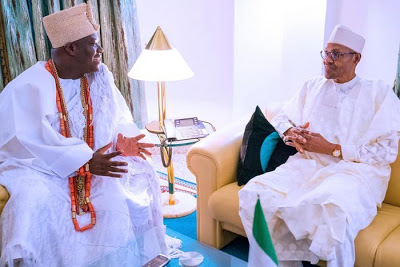 The Ooni of Ife, Oba Adeyeye Ogunwusi, on Thursday called for the tightening of security in the South-West by the Federal Government amid the increasing attacks by herdsmen on communities in the geopolitical zone lately.

The Ooni, who spoke with State House Correspondents after he held a meeting with President Muhammadu Buhari at the Presidential Villa, Abuja, said he came to the State House on behalf of royal fathers in the South-West to make a case for improved security.

His visit came just a week after the late Mrs Funke Olakunri, the daughter of the Afenifere leader, Pa Reuben Fasoranti, was killed by suspected herdsmen along the Kajola-Ore Road in Ondo State.

Speaking on whether he thought the Fulani were being stigmatised , the Yoruba paramount ruler said, “Well, it is not about stigmatisation; it is about separating the wheat from the chaff.

He noted that while not all Fulani herdsmen were involved in the attacks, it was the wish of Yoruba monarchs and their subjects that the Federal Government in collaboration with local communities, should fish out the “bad eggs” among the herdsmen.

“We want to try as much as possible to work with the government right now. They have all the security apparatus and they are meant to defend us; that is what we are looking up to now. We have to stand up and meet with Mr President and he has given us a listening ear and you (will) see a lot of result going forward.”

Responding to a question on the purpose of his visit, Ogunwusi said:

“(It was on) how to improve security. I came to speak on behalf of other traditional rulers. The issue at hand in the South-West is real. The issue of insecurity; we that live in the remote and rural areas of the south-western part of the country, most of the bushes are occupied by strange people and we decided to work with the government to fish them out.

“Everybody is beating the drum of war; we don’t want war. Who can stand war? We want something better for our youths.

“We should better use them (youths) for something good other than shouting war and anarchy. We don’t want that.

“We told the President that and he is on the same page with us. Politicians should be careful not to blow things out of proportion.

“We should make sure things are right and the President has given good directives to security chiefs including the Inspector-General of Police (Mohammed Adamu), to visit all traditional institutions in the South-West.”

The monarch canvassed efficient policing and intelligence gathering that involved using the locals to help fish out strange elements in the various communities.

Opposing a resort to war at this point, he said:

“We shouldn’t keep over-hyping war and we still want to keep the peace in the South-West. We don’t want anarchy.”

He added that overall, what was of utmost importance to the people of the South-West was maximum security.

“What is important is for the youth not to take the law into their own hands, killing and causing violence. The drum of war is resonating loud and we are very worried.

“We need more federal apparatus to defend ourselves. We need security reinforcement from the Federal Government. We understand more than anybody. We don’t want war and we want to work with government to bring peace.

“We are not saying all Fulani are bad; it is about the bad guys working under the name of the Fulani,” the monarch further stated.

Christian Siblings Dragged To Court For Refusing To Pay Tax, Saying It “Goes Against God’s Will”