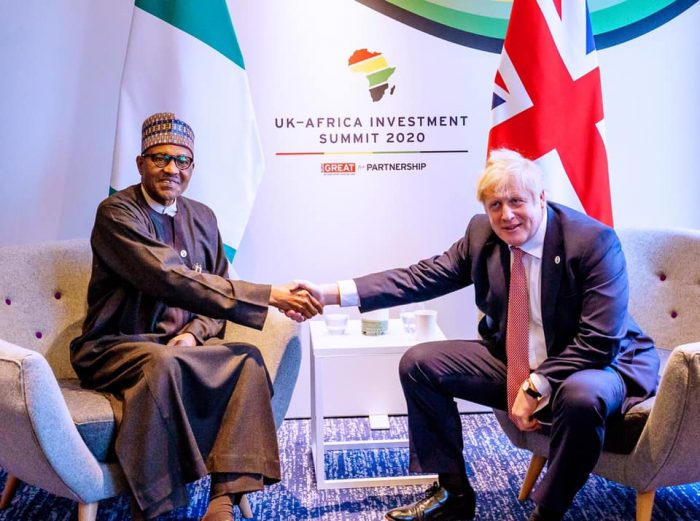 President Muhammadu Buhari has sought the support of the government of United Kingdom in extraditing persons facing corruption charges in Nigeria, but who are taking refuge in Britain.

In a statement on Monday, the presidential spokesman, Mr Femi Adesina, said Buhari made the call during a bilateral meeting with Prime Minister Boris Johnson, at the sidelines of the UK-Africa Investment Summit 2020 in London.

Buhari sought the cooperation of the National Crime Agency (NCA) of the United Kingdom in the investigation of fugitives from Nigeria finding accommodation in that country.

Buhari said the ongoing anti-corruption war in Nigeria, though slow but painstaking, needed the cooperation of the NCA.

Among those said to be taking refuge in the UK since the Buhari administration came to power in 2015 is former Minister of Petroleum, Diezani Alison-Madueke.

Adesina said Buhari briefed Johnson on the positive developments in Nigeria in different areas to include “agriculture, leading almost to self-sufficiency in rice and other grains, which is saving the country billions in foreign exchange, which are now deployed to other areas of development.

On the war against insurgency, the President said things were a lot better, with the disabuse of the minds of the people on the true philosophy of Boko Haram.

He said the though there were challenges in the area of resettling displaced people, it was being tackled frontally.

“We have a long history with the British military, and we are collaborating,” Buhari added.

On Climate change, the President said it was a challenge to Nigeria and neighbouring African countries, especially with the shrinkage of the Lake Chad.

He also said the country was making progress on education, particularly that of the girl child.

In his remarks, Johnson thanked Buhari for being “a regional leader who gives strong encouragement to the West”.

He congratulated him on jobs being created through agriculture, and urged him to do more.

Johnson further commended Buhari for what he called the “social and economic benefits” that had accrued to the country since 2015.

He pledged that the necessary hand of fellowship would be extended to Nigeria on its war against corruption through the NCA, while also pledging to cooperate with Nigeria and other African countries in the inter-basin water transfer, which could solve the Lake Chad problem, and enhance security in the sub-region.

Meanwhile, the Federal High Court in Abuja has given the Economic and Financial Crimes Commission (EFCC) until March 2020 to extradite Mrs. Diezani Madueke back to Nigeria, and threatened to close the case if they don’t provide her till then.