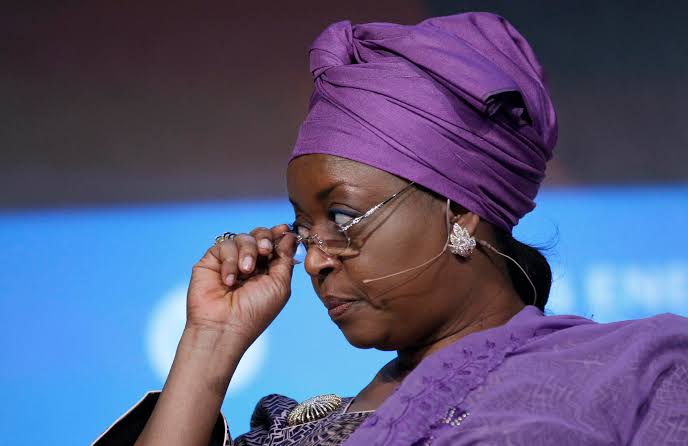 The Economic and Financial Crimes Commission (EFCC) has denied dropping all the charges against former Minister of Petroleum Resources, Diezani Alison-Madueke.

Local news media reported that the EFCC dropped all the 14 count charges against Mrs. Diezani, who has been in the United Kingdom facing corruption investigations since 2015 when she left office as minister.

The anti-graft agency was also said to have dropped the charges against Ben Otti, Nnamdi Okonkwo, Stanley Lawson, Lanre Adesanya, and Dauda Lawal, all of whom are former officials of commercial banks and the Nigerian National Petroleum Corporation (NNPC).

However, in a statement by its spokesperson, Wilson Uwujaren, on Wednesday, the EFCC urged members of the public to disregard the report which is false and misleading.

The anti-graft agency explained that it had not dropped the charges but “split the initial 14-count charge to enable separate arraignment of the defendants”.

Read the full EFCC statement below:

EFCC Has Not Dropped Charges Against Diezani, Others

The attention of the Economic and Financial Crimes Commission, EFCC has been drawn to reports currently circulating in the social media, purporting that the Commission had dropped the criminal charge against a former minister of petroleum resources, Diezani Alison-Madueke and other persons indicted for money laundering.

The Commission enjoins members of the public to disregard the report which is false and misleading. At no time did the Commission withdraw the charge, which is still before Justice Muslim Hassan of the Federal High Court, Lagos.

The charges were first filed on November 28, 2018. Since then, every attempt to arraign the defendants had been frustrated by one excuse or the other. In more than four times that the matter was called for arraignment, it was either that Lanre Adesanya was sick and bedridden in a London Hospital or Nnamdi Okonkwo was hypertensive and on admission in a hospital or StanleyLawson had had a domestic accident and could not appear in court.

It was clear that these recurring excuses were ploys to frustrate the arraignment. To get around this, the Commission took a deliberate decision, which was disclosed in open court, to separately prosecute the defendants in different courts.

This explains why the four count amended charge brought against Dauda Lawal, a former executive director of First Bank, did not include other defendants, except the two who are at large( Diezani Alison-Madueke and Ben Otti). And the ingredients of the offence stated therein only pertains to Lawal’s involvement in the alleged crime, which is the receipt of $25million from the $153million 2015 Peoples Democratic Party presidential election slush fund.

The non-inclusion of other defendants in the original charge in the amended four count charge does not mean that have been exonerated by the Commission of any criminal allegation.

Angry Man Pulls Down His Pants, Threatens To Rape A Female PHCN Staff In Public [Video]