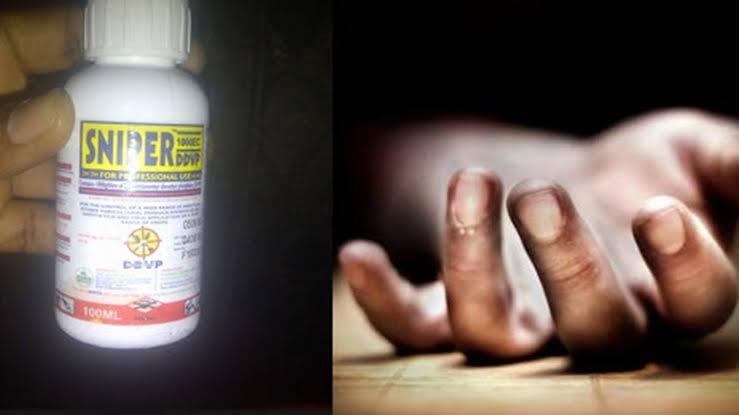 Lagos State Police Command has a 34-year-old welder identified as Tunde Kasali over the death of his girlfriend, Victoria Nwogu, who is a polytechnic student.

Nwogu was found dead with foam in her mouth in Kasali’s apartment at Igbobi Sabe Square, Jibowu area of Lagos, and a bottle of Sniper was found open inside the room.

It was gathered that a bottle of Sniper –a pesticide infamous for being used to commit suicide – was found open inside the room.

Punch reports that Kasali, who is married, had harboured Nwogu in his apartment on February 8, 2020.

After she was found dead in his apartment, Kasali told the police who were invited by the residents that he woke up around 1am and found Nwogu panting for breath, suspecting that she drank from the Sniper.

His argument was, however, contested by the police and he was taken into custody.

A resident simply identified as Adenike told PUNCH that the circumstances surrounding Nwogu’s death was shrouded in secrecy. She said:

“The man (Kasali) is married but he does not live here. I learnt he rented the apartment where he normally relaxes. It was in the morning of February 9 I saw people discussing the incident. Those who have been seeing the girl with him said she was a student at a polytechnic in Lagos.

“He was claiming that he did not do anything to her but there was no one between to bear him witness since it was only her and the girl that were together in the room.”

Another resident, who spoke on condition of anonymity, said he could not say if anything went wrong between the two lovers.

“I don’t know where the girl lives but I have once seen her with the man. They were both in good mood that day. I was surprised when I learnt about the incident. I gathered that the police found a bottle of sniper with the content.

“The man claimed it was a suicide case and that he woke up to see her unconscious. The whole matter is still a mystery. Police should do thorough investigation on it.”

The police spokesperson in Lagos, DSP Bala Elkana, said Nwogu’s corpse had been deposited at the Mainland General Hospital morgue for autopsy.

He added that the case had been transferred to the State Criminal Investigation and Intelligence Department, Yaba, for further investigation. Elkana said:

“A suspected murder case was reported at the Sabo Police Division around 2am on February 9, 2020. The police got information that a lady was found dead at Igbobi Sabe Square and a team was dispatched to the scene.

“The victim was later identified as one Victoria Nwogu, aged 17. She was said to be a part-time polytechnic student. She was found dead in a room where she was harboured by his boyfriend, one Tunde Kasali.

“An opened bottle of unused sniper was found in the room and the deceased was foaming. Investigation is ongoing to unravel the matter.”

ALSO READ: Police Arrests Man Who Butchered His Girlfriend, Eat Her Heart With His Mother For Money Ritual