Rivets State Governor, Nyesom Wike has given the sum of N450 million to victims of the 2019 Presidential election in Abonnema, Akuku-Toru Local government area of the state. 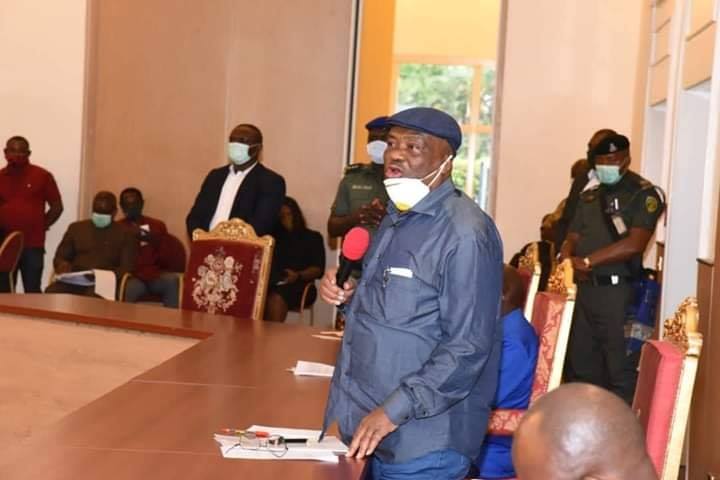 The governor, who met with the victims, deceased families and the council of chiefs at the Multi purpose hall in Abonema Monday said their bank accounts would be credited with the amount of money due them from Wednesday.

Wike said categories of beneficiaries included families of deceased persons, the wounded, those arrested and those who lost their property.

The Governor, who was represented by the Secretary to the State Government, Dr. Tammy Danagogo, insisted that the money should be paid to the accounts of the 37 beneficiaries directly.

“We are here to inform you that the money is ready and by Wednesday you will begin to receive the alerts. This Money is not enough to compensate the people of Abonema especially those, who lost their lives.

“We have a list of 37 persons that lost their lives. Remember, money is not enough. But the Governor is doing this to let you know that he stands with you. If there is anybody I know that is reliable to stand with you in the face of any adversity, it is Governor Wike,” he said.

The Amayanabo of Abonema, King Disreal Bobmanuel, appreciated Wike for identifying with the people of his kingdom.

Describing the Governor as dependable, he recalled that the community cried to the him over the destruction and killings that occurred in the community during the election and he wasted no time to visit them.

“The compensation is quite generous. I want to thank Wike for being a friend to the people of Akuku-Toru. I thank him for showing concern and helping us each time we go to him,” he said.

He urged the beneficiaries to think of how to properly utilise the money and avoid engaging in frivolities and costly enjoyment.

ALSO READ: “I Am Not Dollars That You Can Pocket Recklessly And Sheepishly” – Wike Blast Ganduje