Rivers State Governor, Nyesom Wike said God used him to install his predecessor and Minister of Transport, Rotimi Amaechi, as governor of the state. 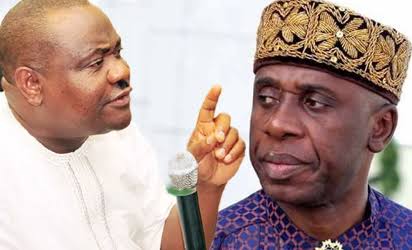 The governor stated this while reacting to an interview where Amaechi said he would not descend to the level of Wike, whom he described as his former staff.

KanyiDaily recalls that Amaechi had said it was an insult for him to exchange words with Wike whom he has surpassed on all levels.

Reacting during an interview with the BBC Pidgin on Friday, Wike said it is not possible to be an employee or staff of Amaechi whom he made governor.

“Amaechi and I were in the same party, and in politics, everybody has his own ambition. He had his ambition to be governor, and at the time, I didn’t. So, we fought and supported him to be governor.”

“Now he’s in APC, and you don’t expect me as a PDP person to support what he does. I was the one God used to make Amaechi governor. I will even give you a tape from what he said in the church; that after God, I’m next. But when he was talking the other day, saying I was his staff, his employee, I said no problem.

“We all sat to make you governor, and I was the one who championed it. How do you call someone who made you governor an employee? When he became governor, he asked me; how are we going to run this government, and he offered me to be commissioner of finance, but I said no, let me be in the chief of staff office.

“Well, we have passed that. He said over his dead body will I be governor, now I am looking for that dead body. In 2015 when I won, they said PDP was in power, but I also won again in 2019 when APC was in power.”

KanyiDaily recalls that Wike and Amaechi had recently engaged in a verbal fight at the burial of a former Justice of the Supreme Court, Adolphus Karibi-Whyte, in the Abonnema, Akuku-Toru Local Government Area of the state. 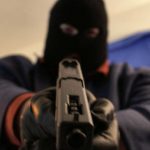 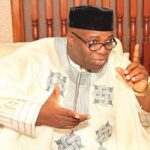