The United Kingdom has employed 353 Nigerian doctors in three months amid the ongoing NARD strike in Nigeria. 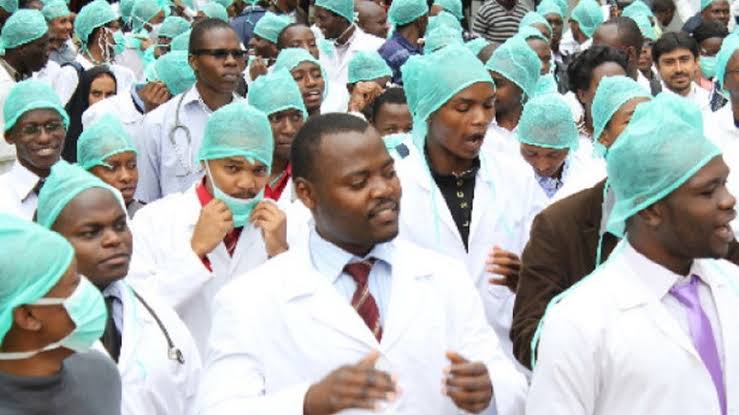 No less than 353 Nigerian doctors have been registered to work in the United Kingdom in the last 100 days, amid the nationwide strike by the National Association of Resident Doctors (NARD).

Efforts by the house of representatives to reach a new agreement between the government and NARD ended in a deadlock despite series of meetings.

The Industrial Court had also ruled that the doctors should resume work but the doctors insisted on continuing with the strike until their demands are met.

According to Punch, checks on the website of the General Medical Council – the body which licenses and maintains the official register of medical practitioners in the UK – showed that the GMC licensed at least 353 Nigerian-trained doctors between June 10, 2021 and September 20, 2021.

The statistics also showed that between July 24, 2020 and September 21, 2021, about 862 Nigeria trained doctors were licensed in the UK despite the COVID-19 pandemic. Overall, 8,737 doctors who obtained their degrees in Nigeria currently practice in the UK.

Speaking on the development on Tuesday, NARD Vice-President, Julian Ojebo said the rate of migration might double in the coming weeks since doctors were not given the right remuneration.

Ojebo said that the ongoing strike has opened the eyes of Nigerian doctors that the government does not care about them, adding that the number of doctors migrating to Saudi Arabia might even be more than those moving to the UK.

READ:  Why I Turned Down President Buhari's Ambassadorial Nomination - Ex-Minister, Tallen Opens Up

He said it was unfortunate that the government had failed to address the plight of doctors and meet their conditions for calling off the strike which began on August 1, 2021.

“If 353 Nigerian doctors have been licensed in the last 100 days, I am sure the figure will double within the next one month. The strike has opened the eyes to the doctors that Nigeria does not care about them.

“I am sure the statistics for those migrating to Saudi Arabia would be higher. I have always said it that remuneration is usually the trigger for migration. It is now worse today due to insecurity and the lack of political will by government appointees to address the issues affecting the health sector.

“I can tell you categorically that some of the issues we are fighting for are matters that should have been addressed since 2014 and we are still protesting in 2021. Like we have always said, whatever you earn in Nigeria, you stand the opportunity of earning three times that amount with better working conditions.”

KanyiDaily recalls that last week, President Buhari had called on NARD doctors to call off their strike and return to their duty posts, saying that embarking on industrial action at this time when Nigerians need them most is not the best action to take.

Related Topics:doctorshealthNARDNewsNigeriaStrikeUnited Kingdom
Up Next

IPOB Has Been Hijacked By Cultists, Kidnappers And Armed Robbers – Governor Umahi