The Indigenous People of Biafra (IPOB) has reacted to the arrest of Uche Nwosu, the son-in-law of former Imo State Governor, Rochas Okorocha, by some armed men suspected to be operatives of the Nigerian Police Force. 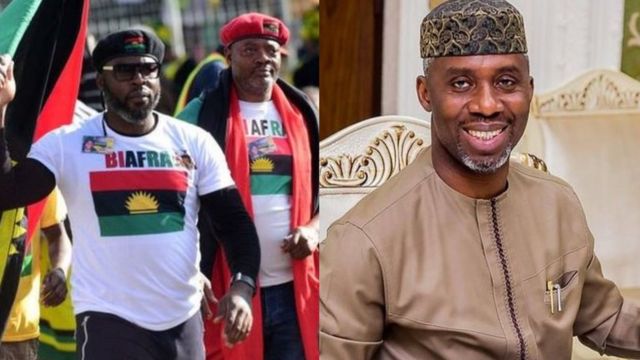 Eyewitnesses said the masked policemen who came with a military van fired live bullets in the air and at the church building before carrying out their main task to arrest Nwosu.

Reacting in a statement by its spokesperson, Emma Powerful, IPOB condemned the arrest of Nwosu, saying it was now clear who created unknown gunmen to demonize it and its security arm, the Eastern Security Network (ESN).

In the statement titled “Abduction of Uche Nwosu has exposed masterminds of insecurity in Imo state”, the group also revealed those that support and finance its activities.

It reads, “We the global movement and family of the Indigenous People of Biafra (IPOB) condemn the abduction of Uche Nwosu in the church.

“This is another vindication that IPOB and Eastern Security Network (ESN) are not responsible for the numerous attacks, abductions/kidnappings in Imo State contrary to false accusations and propaganda by Hope Uzodinma and his co-travellers.

“The incident has also further confirmed the complicity of Hope Uzodinma and the All Progressives Congress party in the insecurity going on in Imo State and the South-East region.

“But for the dexterity and fighting spirit of Nwosu’s family and associates, Hope Uzodinma, his co-travellers and some infamous media houses would have, as usual, pointed accusing fingers at ESN, IPOB and unknown gunmen. But God Almighty, Chukwu Okike Abiama, has exposed them this time around.

IPOB added that no single individual can sponsor them as they have millions of family members home and abroad who sponsor the global movement.

“It will not be a surprise if by tomorrow, Hope Uzodinma fingers Uche Nwosu and his in-law Rochas Okorocha as the sponsors of IPOB, ESN, unknown gunmen and insecurity in Imo State. We know his antics and such options may not be out of the table.

“For the umpteenth time, no single individual can sponsor IPOB. We are a global movement and millions of our family members home and abroad remain the source of our sponsorship.

“We have never hidden this fact because we are not a secret or terror organisation. IPOB is well grounded and we don’t need any Okorocha, Uche Nwosu or Hope Uzodinma or any politician for that matter to sponsor us. We have no dealings with corrupt politicians and people with questionable source of wealth.

“It’s now transparently obvious to all who the masterminds of the abductions/killings of many traditional rulers and religious leaders including politicians in Imo State and other parts of South East are.

“It is also now clear who created unknown gunmen to demonise and implicate IPOB and ESN operatives.”

Though Nwosu has been released unconditionally without the police giving the reason for his arrest, Okorocha slammed the security agents for assaulting his family and desecrating the church with sporadic shooting that heralded his son-in-law’s arrest.

Meanwhile, Uche Nwosu has narrated his experience, saying his arrest in the church was like “war” because the security agents who came for him were firing gunshots inside the place of worship.

READ:  White Men Came To Nigeria With Bible, Took Our Land And Parents Away In Chains — MURIC