The Attorney-General of the Federation and Minister of Justice, Abubakar Malami (SAN) has revealed what President Muhammadu Buhari will consider before he grants the request for the release of the leader of the Indigenous People of Biafra (IPOB), Nnamdi Kanu. 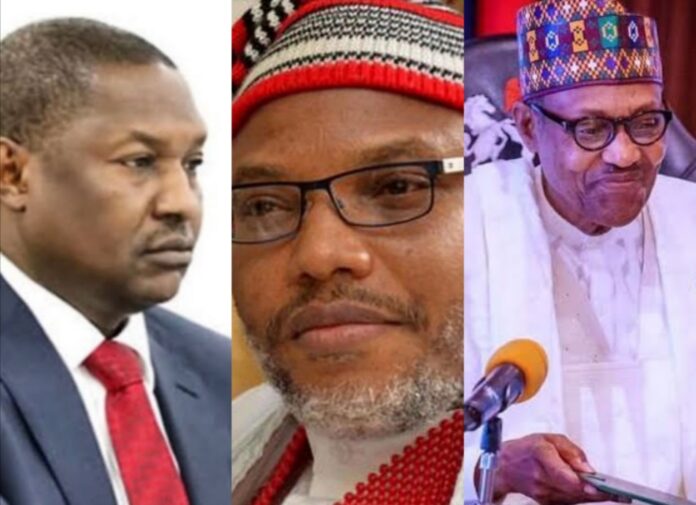 Speaking as a guest on NTA’s Good Morning Nigeria Show on Tuesday, Malami said the president will consider the interest of over 200 million Nigerians before he granting the call for Nnamdi Kanu’s release.

Malami said, “By way of general statements to the two issues presented: the issue relating to electoral bill and the issue relating to Kanu and by extension, IPOB, what I can tell you for certain is that the decision of the President is based fundamentally and at all times on public interest consideration.

“In the art of governance and what I have come to learn about the mind and heart of the President, Muhammadu Buhari, is to consider the 200 million as against the limited people.

READ:  "Police Will No Longer Fold Their Hands And Be Killed Like Chickens" - Edo CP, Johnson Kokumo

“By extension, the issue of Kanu, what would as well govern the decision of the President in terms of whatever request is presented is the public interest as against limited sectional interest of it.”

KanyiDaily recalls that some respected Igbo elders, led by Minister of Aviation in the First Republic, Chief Mbazulike Amaechi, had visited President Buhari in Aso Rock, Abuja, and requested the unconditional release of Kanu.