No less than seven persons including two policemen have been killed in a coordinated robbery attack on commercial banks in Uromi, Esan North-West local government area of Edo State. 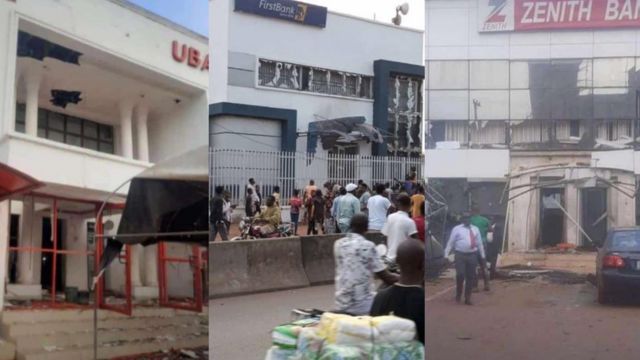 It was gathered that the gunmen who come in their numbers on Thursday afternoon, February 24, attacked First Bank, UBA, Zenith, and Union Banks with dynamites for over one hour.

Seven persons, including two policemen and five civilians, were killed by the armed robbers who were said to have succeeded in making away with a large sum of money from the four banks.

A resident who witnessed the incident said “The armed robbers laid siege, right from Angle 90 Junction in Uromi, through Tazona Junction, with heavy gunfire and explosives, while three commercial banks were simultaneously attacked.

“A metallic/silver Toyota Lexus 350 Sport Utility Vehicle (SUV) was fully loaded with cash, which the armed robbers hurriedly escaped with, while moving towards Ubiaza’s old road, and shooting sporadically to scare passersby and prevent any challenge from security operatives.”

When contacted by Vanguard, the Police Public Relations Officer in the Edo State Police Command, Bello Kontongs in a terse text message said four banks and a police station were attacked.

A staff of one of the affected banks said the robbers came prepared with dynamites which they used to gain entrance to the banks before escaping with huge cash from the banks.

The source said, “The robbers came over-prepared. We had the full complement of staff when they stormed our bank and forced their way into the banking hall using dynamites.

“They were shooting everywhere, destroyed vehicles in the compound and they succeeded in getting into our strongroom and went away with the cash available there. Thank God no life was lost in our bank”.

READ:  Elizabeth Jack-Rich To Give Out 44 Pairs Of Foot Wears Including Her Wedding Shoe To Celebrate Birthday

So many banks in my home town, Uromi in Nigeria was robbed today by daredevil armed robbers. No security presence for almost 2 hours that the robbery lasted. It is so sad that lives and properties are not protected in that country. Reason people keep getting tired of the system😭 pic.twitter.com/VGZaf4Ro3r

Lord jesus In solidarity with this friend's relative I say thank you.
He has scaled through this one again.
Thank you for the lives saved and those lost.m
May they rest in peace. Amen. #Uromi will rise again. #Uromi will be great again, in your name we pray Amen. pic.twitter.com/WjzCQSUxp5

Some Banks in uromi Edo state were robbed Today, some feared dead💔 pic.twitter.com/BE1JrlxzNV

While all the focus was on #Ukraine robbers invaded five banks in Uromi town in Edo state. Reports say about 22 persons were killed. pic.twitter.com/A1mzTZN0OP

This video shows the aftermath of the robberies in some of the banks.

Residents of the community say the robberies were coordinated. pic.twitter.com/N3ExpNi9r8

This comes just two weeks after armed robbers killed two policemen and an unspecific number of civilians during an attack on a bullion van in Oyo State.

READ:  "Fat Is The Definition Of Rich" - Cubana Chief Priest Says After Being Mocked

BREAKING: Fire Breaks Out At Federal Ministry Of Finance Headquarters In Abuja