The General Overseer of the Citadel Global Community Church, Pastor Tunde Bakare has revealed where he got the N100 million he paid for the presidential nomination forms of the All Progressives Congress (APC). KanyiDaily recalls that the cleric obtained the N100 million presidential expression of interest and nomination forms of the ruling party on May 5.

Speaking on Monday in an interview with Channels Television, the cleric said he paid for the forms from his account without borrowing or begging even though there are many people who are willing to pay on his behalf.

Pastor Bakare noted that he didn’t expect the forms to cost more than N50 million, but said he understood that the price is part of efforts to make the APC “formidable”.

He said, “Talking of the cost, there is a price to pay for everything. I was not part of the decision making process, but if I’m going to apply for anything and they say this is the way to go about it, the price has to be paid. It is like going to a school or university; you pay a fee.

READ:  Court Orders INEC Not To Issue Certificate Of Return To Rochas Okorocha

“Do I consider that fee or cost very cheap? Not at all. Not in the least. Just as everything in life that is highly valued comes with a price, that was the price the party fixed and those who want to join will have to pay the same price.

“By the grace of God, we paid without having to borrow or beg. God Almighty, who had provided, is still providing and He will continue to provide. And it is not money thrown away; this is part of the investment in a party that needs resources to actually be a formidable party.

“I remember sharing with some people that in 2015, when the president contested the first time, the form was about N30 million. This time around, PDP fixed N40 million; I was expecting that the form would not be more than N50 million, but when they doubled the price, whatever is worth it because this is the time to step in and begin to make a difference. We had to comply by paying the price.”

Pastor Bakare also said his interest in the presidency is based on personal conviction about his capability to serve Nigeria well if he is elected.

READ:  Married Man Arrested After His Mistress Died Inside His Matrimonial Home In Imo

He said, “There was a former senator from Kaduna state who said Bakare has gone quiet since N100 million is mentioned because he could not afford it. I don’t trade insults with people. I just did what I needed to do — spoke against — but had to comply until we make a difference.

“Look at the price Christ paid. He left the whole of heaven and the glory of heaven to come to the earth to pay a huge price in order to save mankind. To birth a new nation, to serve in a way that will raise standards and at the same time make life more comfortable for others, you will have to go through pain.

“Money is the easy thing to trade. Yes, by the grace of God, we paid. Don’t forget that there are so many people who are even willing to pay on our behalf and so many people will give towards it and have given towards it. But whatever was transferred to the party’s account came from my account.”

KanyiDaily recalls that Pastor Tunde Bakare had declared that he would be Nigeria’s next president because he’s destined to succeed the current leader, Muhammadu Buhari. 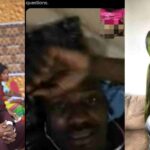