Anita Okoye, the embattled wife of Paul Okoye of the now-defunct music group, Psquare, has dragged him to court for alleged infidelity and cheating her of a total sum of N10 million. In a suit filed at the High Court in Abuja, Anita accused Paul of having an affair with one of their housemaids named Florence, also revealing several chats between the singer and other women.

The court documents stated that Paul sent his estranged wife and her sister packing after they discovered the affair between him and the housemaid.

It was also stated that the singer boasted about it, claiming it was a means to clip his wife’s wings so she could have no one else to lean on.

Anita equally alleged that her estranged husband showed little interest in his kid’s upbringing, and barely participated in training them.

She added that he backed out of an undertaking by failing to give her brand, TannkCo, a space in the mall to which she contributed N10m for the purchase of the land and the building of the mall. These, she listed, as her reasons for filing a lawsuit.

The document reads, “That I know as a fact that the Respondent on 11th June, 2020, threw the Petitioner’s Sister and I out of the house after we discovered that he had started an illicit affair with one of the house helps by name Florence.

“That I know as a fact that while sending I and petitioner’s sister packing, the Respondent also boasted that the reason for his actions was to ensure that the Petitioner’s wings were clipped and that she had no one else to lean on.

“That I know as a fact that the Respondent has shown minimal interest in the upbringing of the children and rarely participates in discipline of the children.

“That I know as a fact that the Respondent has always been travelling on music tours and is barely at home and does not have time for family life.”

There were also claims that Anita gave her husband the sum of ten million naira (N10,000,000.00) and they had an agreement that she would be granted a portion of land at his company, TannkCo premises to build a mall. It was alleged that Paul failed to honour the agreement after he collected the money.

The document further said: “That I know as a fact that the Petitioner founded a company called TannkCo in 2019.

“That the Petitioner and the Respondent agreed to build a mall where TannkCo would have its main offices and the Petitioner contributed N10,000,000.00 (Ten Million Naira) for the purchase of the land and the building of the mall.”

“That I know as a fact that the Respondent upon completion of the mall, reneged on the agreement and failed to give TannkCo a space in the mall.

“That I know as a fact that I have been close to the petitioner and the respondent since their marriage and I know that the Petitioner has endured a lot of painful experiences in the marriage and I was always encouraging her to continue to do her best for the marriage to survive.

“That I make this written statement oath in good faith and to the best of my knowledge, information and belief and in accordance with the Oaths Act,” a deponent close to the petitioner said. 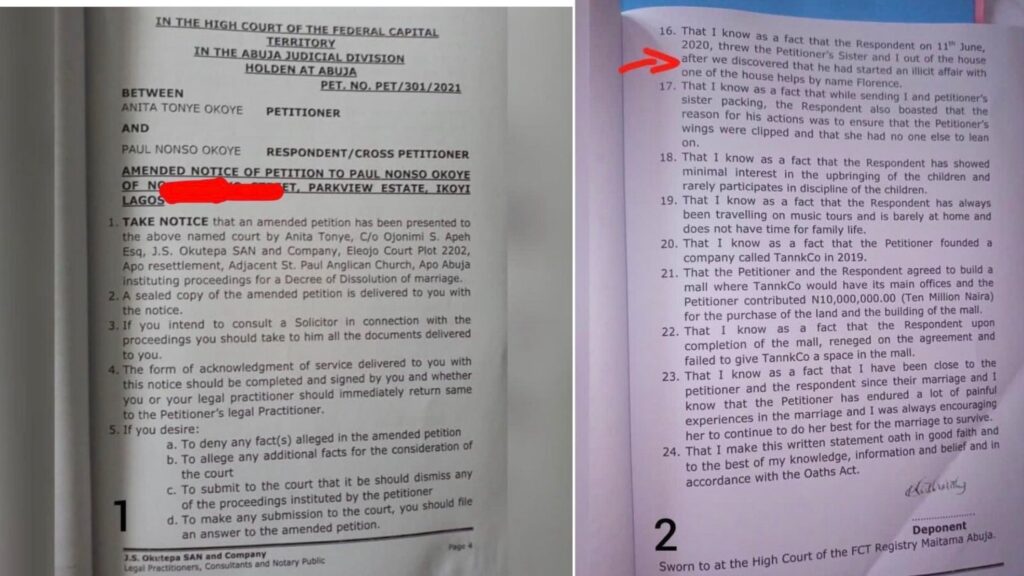 READ:  4 Charged To Court For The Murder Of Cynthia Osokogu