President Muhammadu Buhari has given National Honours and the sum of N200 million to Team Nigeria contingents to the 2022 Commonwealth Games and World Athletics championships. 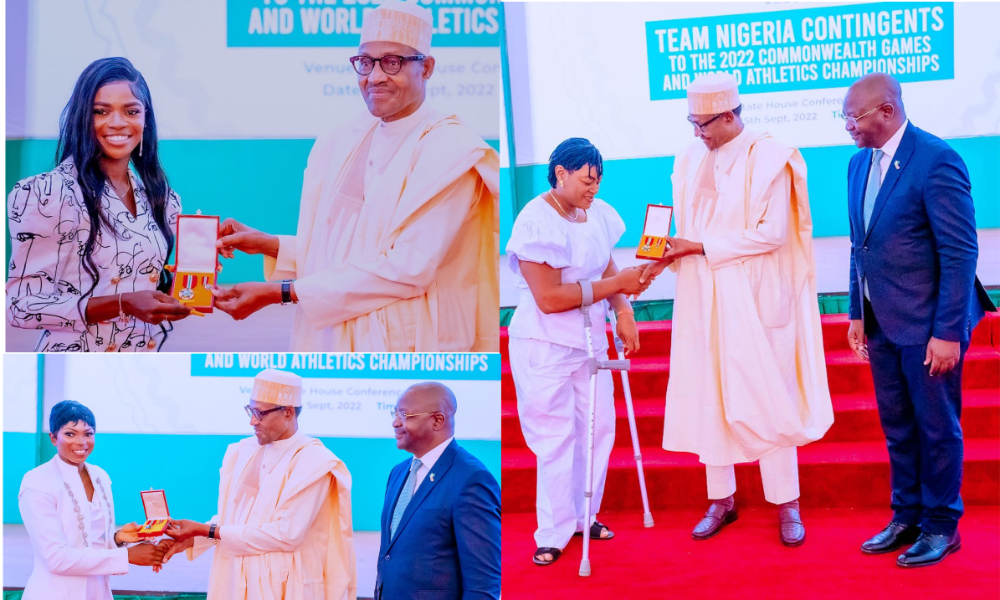 This was contained in a statement signed by the Special Adviser to the President on Media and Publicity, Femi Adesina, titled ‘President Buhari rewards Commonwealth Games, World Athletics Championships athletes with national honours, N200 million.’

During the award ceremony held at the State House, Abuja, Buhari congratulated the athletes for their “outstanding performances” saying their hour of sporting glory beamed the ‘‘radar of the world on Nigeria’’ and their exploits have projected the positive image of the country.

Speaking at a presidential reception in honour of the athletes, the President said his government is committed to rewarding excellence, no less for members of Team Nigeria who ignited the spirit of victory in the nation through stellar performances at international competitions.

Describing the athletes as champions, worthy ambassadors, national heroes and heroines, Buhari said the awards will “spur them to greater heights.”

He said ”I watched with millions of Nigerians those exciting moments when you all brought smiles to us and our homes by breaking world, national and games records, as well as achieving personal best in your careers.

“Your outstanding performances in recent times are consistent with the determination of a nation always yearning for excellent performance. You all, members of Team Nigeria have ignited the spirit for victory in our nation but even more you have been victorious in major sporting championships and games.

”I have followed keenly your achievements at the World Championships in Oregon USA and indeed your remarkable performance at the recently concluded Commonwealth Games in Birmingham, United Kingdom. And I am very pleased that you displayed at both the personal and group levels great sporting talents and delivered for your country great podium performances.”

The President noted that 12 times the world stood still as Nigeria’s flag was hoisted and the National Anthem recited. 35 times we made it to the podium.

“You all Team Nigeria made that possible. You brought glory and honour to our country. And today, on behalf of the nation- I say, THANK YOU!”

Reiterating the commitment of this regime in providing the enabling environment for youths to ascend to the pinnacle of their chosen careers, the President expressed satisfaction with the impact the Adopt-An-Athlete Initiative of the Federal Ministry of Youth and Sports had on the performance of athletes.

He urged more private individuals and corporate organizations to support the government’s investment in sports, which has been reclassified from being a recreational activity to being a business in line with modern practices worldwide.

Buhari also acknowledged the strides witnessed in the sports sector under the Minister of Youth and Sports Development, Sunday Dare and his team, commending the numerous and sustained successes recorded in the last few years.

On his part, Dare described 2022 as an outstanding year in the history of Nigerian sports.

Highlighting the most remarkable feats, Dare said in track and field, Amusan in a span of 4 months won Nigeria’s first ever gold medal in World Athletics Championships in Eugene, Oregon, USA with a world record performance in an event highly dominated by the Americans and Europeans.

He said she successfully defended her Commonwealth Games title, which she won in 2018 in Gold Coast, with a games record in 2022 in Birmingham; and Diamond League title in Zurich, Switzerland on September 8, 2022, the Minister said, adding that this remarkable performance has never been achieved by any Nigerian in the history of our sports.

Dare further revealed that Brume, another trailblazer in Nigerian sports, won silver medal in the Women’s Long Jump event at the 2022 World Athletics Championships and a gold medal at the 2022 Commonwealth Games in Birmingham with a games record performance.

”In confirming that the performance was not a fluke, she won a gold medal in the Women’s 68 kg category at the just concluded 2022 Commonwealth Games,” he said.

Describing Nigeria as the best Para Powerlifting nation in the world, the Minister hailed Oluwafemiayo for keeping with this tradition by winning gold medal in the Women’s heavyweight category, setting a new world record in that class at the Tokyo 2020 Paralympics and the 2022 Commonwealth Games.

”Mr. President, through the sporting exploits and excellence of the young athletes before you in this hall and several others not able to make it for this reception, Nigeria has served notice that it will not relent.

”That it will show up and compete for every laurel available not only in sports but in youth development, economic progress, social emancipation, political development and many more,” he said.

He thanked the President, saying ”this administration’s investment in youth and sports development, will continue to yield dividends years after you might have completed your term as President of the Federal Republic of Nigeria.”

READ:  Nigerians Understand & Sympathise With Me, Despite Calling Me 'Baba Go Slow' ― Buhari 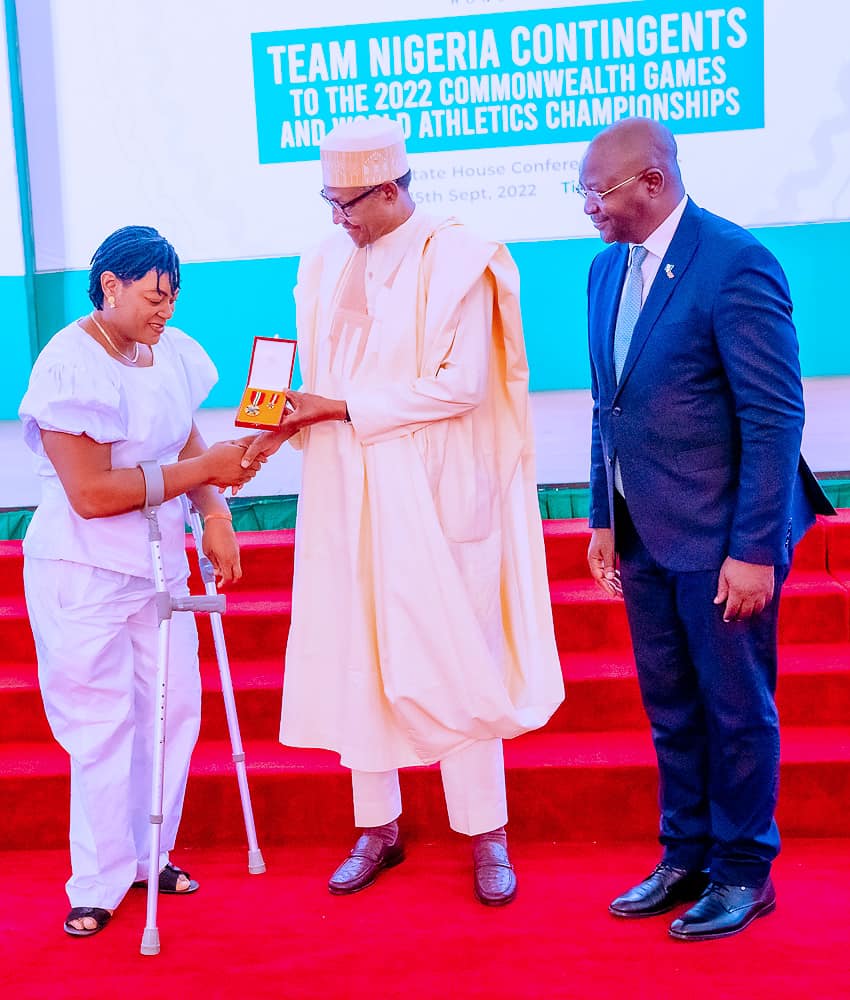 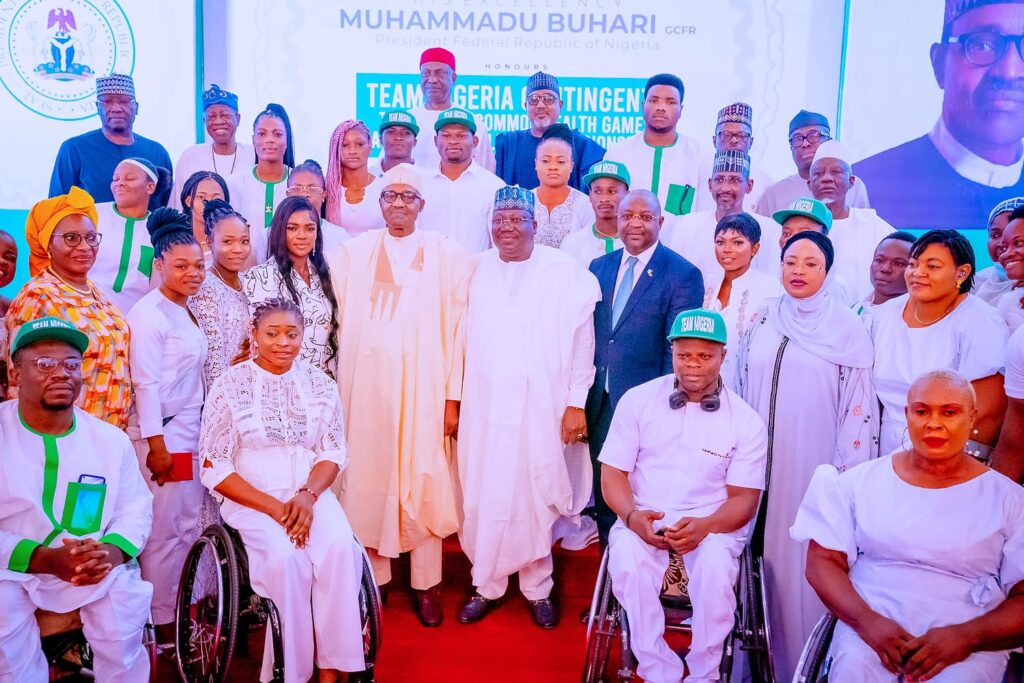 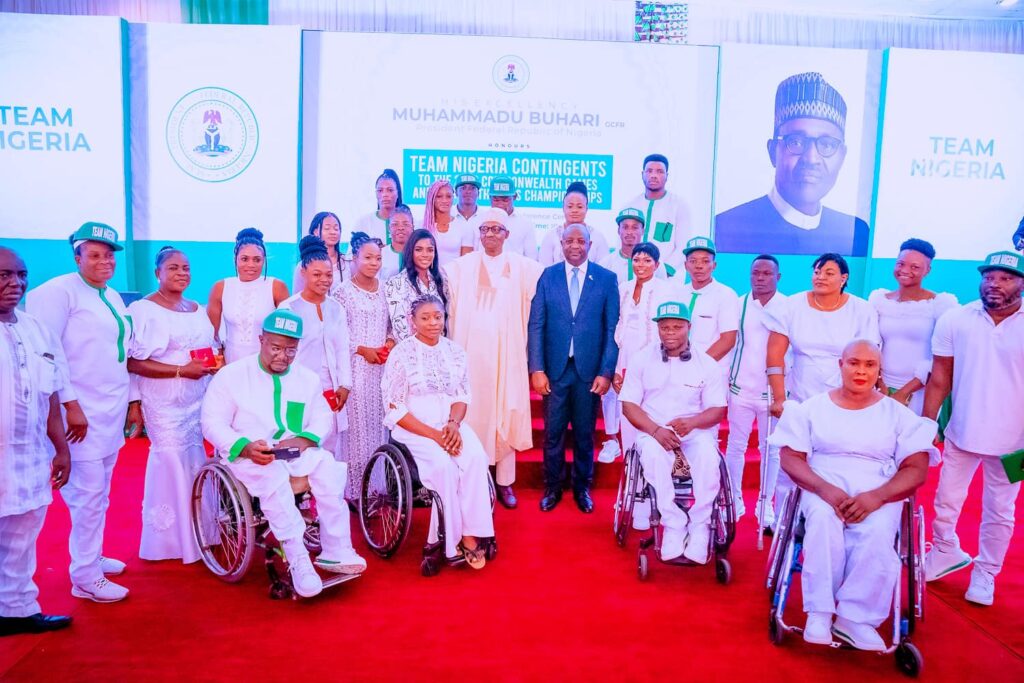 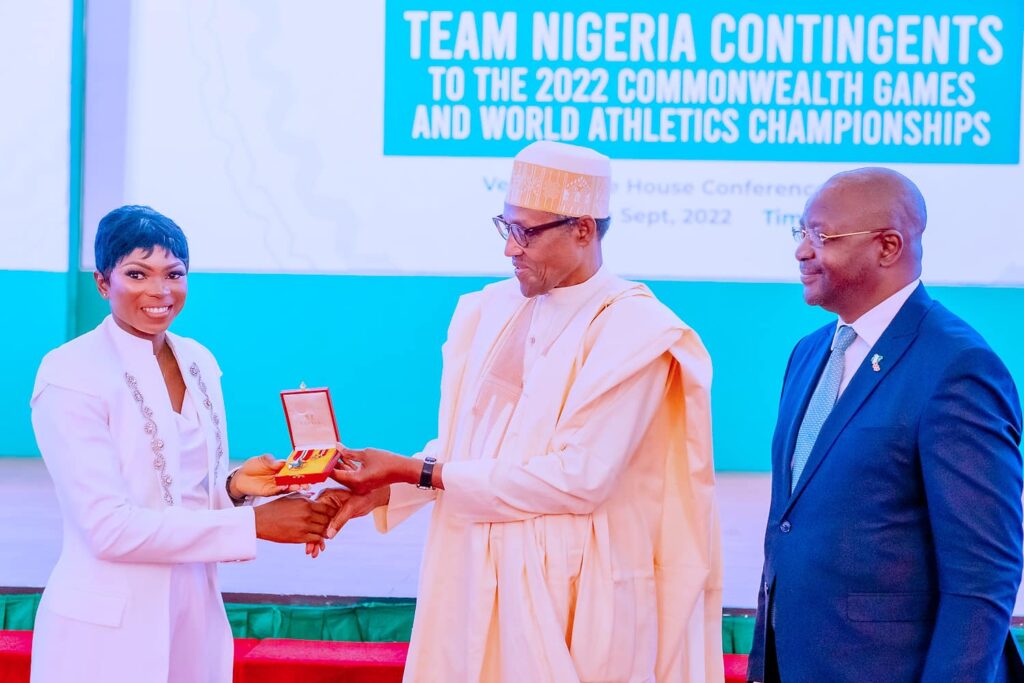 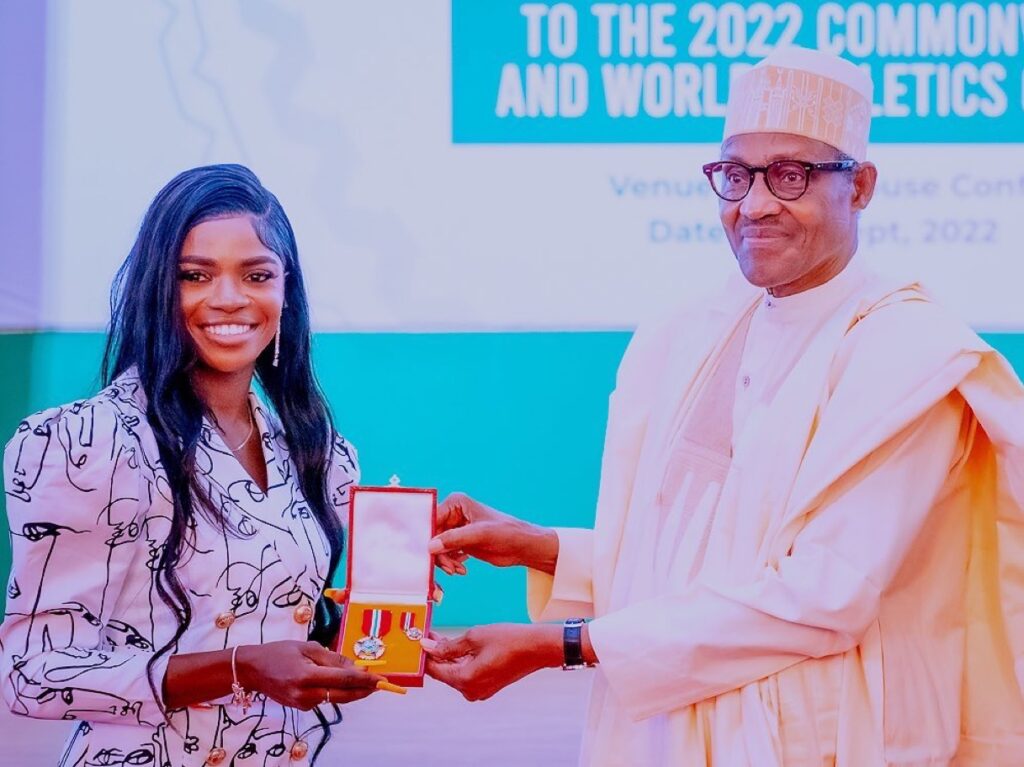 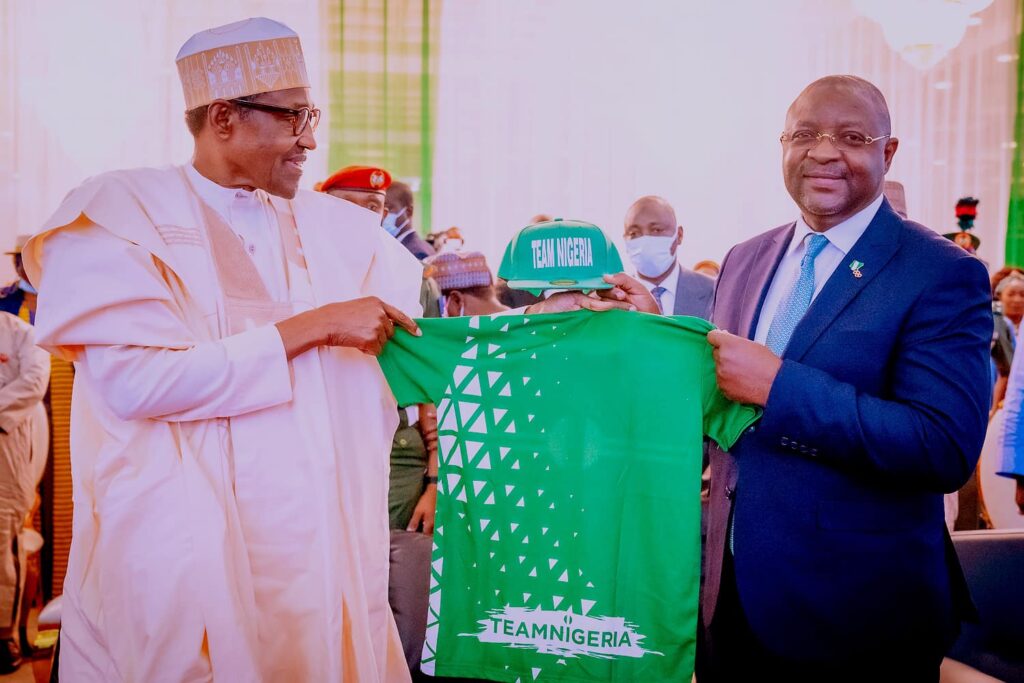 KanyiDaily recalls that Tobi Amusan recently broke a 22-year-old record by winning the women’s 100 meters hurdles at this year’s Diamond League in Zurich. 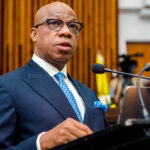