Popular gospel singer, Dunsin Oyekan has taken to social media to appreciate God after he survived a ghastly car accident along the Lagos-Ibadan expressway. It was gathered that the singer was going for a youth summit titled ‘Giant Killers’ at the University of Ibadan in Oyo state when his Toyota Prado jeep crashed with a truck at Ishara axis of Ogun state on Saturday.

In a series of photos and videos circulating on social media, Oyekan could be seen inside the damaged vehicle as passers-by tried to rescue those believed to be trapped.

Taking to his Instagram page, the singer appreciated God for saving his life and thanked the people who have reached out to him after the accident.

Oyekan wrote: “Indeed God is sweet to worship (Oluwadunsin). God is my glory, the lifter up of my head. The keeper of Isreal neither sleeps nor slumber, he watches over his word to perform it.”

“Glory to God now and forever more. I remain in awe of God!!! I am perfectly okay…. body, soul and mind….Thank you everyone for the calls, messages prayers and well wishes.”

READ:  Why I Won't Celebrate My Birthday This Year - Tonto Dikeh Reveals

Update! @DunsinOyekan and his Crew members are ok and live now at Ibadan for a program at University of Ibadan.@trafficbutter @TrafficChiefNG

KanyiDaily recalls that Grammy award-winning Nigerian singer, Burna Boy was also involved in a ghastly accident that left his $282,000 Ferrari in a wreck on Saturday. 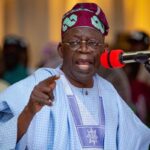