The 23 remaining captives of the Kaduna train attack have regained their freedom from the den of the terrorists who abducted them in March this year. Secretary of the Chief of Defence Staff Action Committee, Usman Yusuf, who disclosed this, said the hostages were released at about 4pm on Wednesday.

According to him, the committee took the custody of the victims who were kidnapped by Boko Haram terrorists during an attack on a moving passenger train in Kaduna on March 28, 2022.

Recall that the criminals who attacked the AK9 Train in Kaduna, had before now released hostages in batches with the last release being on August 19, 2022.

READ:  'How I Handed Over $5 Million To Him' - Obanikoro Testifies Against Fayose In Court

The terrorists blew up the rail track and bombed the moving train.

The attack killed several people and the insurgents abducted more than 60 passengers.

The unprecedented attack was greeted with national and international outrage.

Distraught family members had protested several times to demand the release of their loved ones.

Worried about the situation, the Nigeria Railway Corporation temporarily suspended activities, with President Muhammadu Buhari directing security agencies to rescue the victims after he met their families.

The Minister of Transportation, Mu’azu Sambo, had said the Abuja-Kaduna rail line will not resume until all those kidnapped by bandits in March are rescued and reunited with their families.

A terrorist negotiator, Tukur Mamu, was on September 6, 2022 arrested in Cairo, Egypt while on his way to Saudi Arabia and returned to Nigeria the next day.

The Department of State Services had alleged that Mamu, who negotiated between terrorists and families of kidnap victims, was part of an international terrorist network and used the cover of journalism to perpetrate his deeds.

READ:  IPOB Leader, Nnamdi Kanu Reveals Why Every Nigerian Should Get An AK-47

Popular Kaduna-based Islamic cleric, Sheikh Ahmad Gumi, to whom Mamu is an aide, had faulted the arrest of Mamu.

Gumi had asked the security agency to charge Mamu to court if it had any evidence against him, rather than keeping him in custody.

But the DSS, in its reaction, said it would not be distracted by some skewed narratives in the media and requested to be left alone to concentrate on the ongoing investigations, the outcomes of which it said have remained ‘mindboggling’.

Below is the statement announcing the release of the remaining victims:

I am pleased to announce to the nation and the world that at 1600Hrs. (4:00pm) today, Wednesday 5-10-2022, the seven-man Presidential Committee assembled by the Chief of Defense Staff (CDS), General L E O Irabor, secured the release and took custody of all the 23 remaining passengers held hostage by Boko Haram Terrorists following the attack on the Abuja to Kaduna train on 28-3-2022. The nation owes a debt of gratitude to the Nigerian Military under the leadership of the CDS who conceived and guided the operation from start to finish. All sister Security Agencies and the Federal Ministry of Transportation contributed immensely to this Operation. The unwavering support of the President and Commander in Chief GCFR is what made it all possible. Members of this Committee are grateful for the rare honour and privilege to be part of this Humanitarian Operation. May God Almighty Heal Our Wounds and Bring Peace to Our Land.

In other news, Kanyi Daily had reported that Nigerian governors had said Abuja-Kaduna train attack questions their collective capacity to govern.

READ:  Governor Soludo Speaks On 'Discovery Of Gold Worth Over $900 Trillion In Anambra' 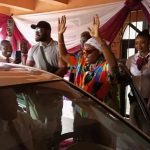