A chieftain of the All Progressive Congress (APC), Abubakar Abu Giza has been stripped naked and molested by youth suspected to be supporters of the party in Nasarawa state. 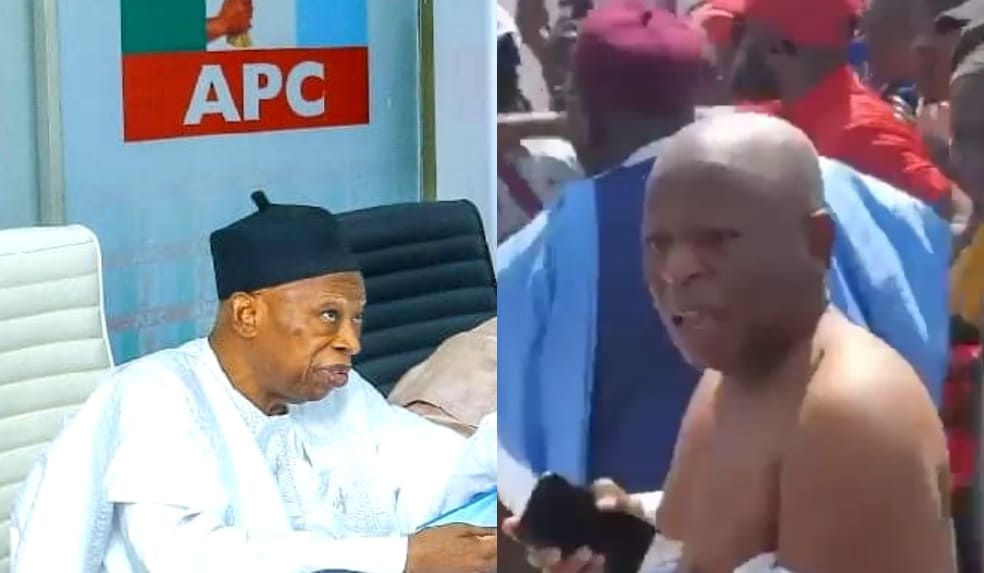 A viral video shows the moment Giza was allegedly humiliated by the youths on Friday when the APC held its meager rally in Lafia, the Nasarawa state capital.

It was gathered that the youths suspected to be supporters of the party allegedly descended on the APC chieftain at the Emir Palace in Lafia over the crisis rocking the ruling party.

Reacting to the video on Friday, the Chairman of the Nasarawa Inter-party Advisory Council (IPAC), Hon. Cletus Ogah Doma condemned in totality the attack on APC Chieftain and cautioned the youth in the state against thuggery.

The IPAC Chairman said the youths should remain neutral and should not allow themselves to be used as agents in the hands of the politicians because they are the vanguard of nation-building and instrument of integration.

READ:  "We Are Ready To Defeat You Again, Even At World Court" - Oshiomhole Mocks Atiku, PDP

Ogah, who is also the Chairman of the Zenith Party in the state, condemned the molestation of Giza, describing the act as barbaric and unwholesome, stating that Nigerians must rise against attack on innocent citizens.

He advised the ruling APC and other political parties, residents, and other citizens to robustly condemn thuggery and other forms of unwholesome acts that could truncate the forthcoming general elections in the country.

“The yearnings and aspirations of Nigerians to have a credible, peaceful conduct of elections in 2023, must not be allowed in the hands of the politicians causing troubles in the country.

“It is the collective responsibility of all actors and members of of all the political parties to ensure that campaigns are conducted with decorum and in accordance with the rules of the game”, the Zenith Labour party Chairman declared.

Ogah appealed to the people of the state to desist from fanning the embers of discord and violence during electioneering campaigns.

BREAKING NEWS
APC National Chairman stripped Naked and molested in Nasarawa State over multiple crises rocking the party in the state. Some of the members said they don't want Bola Tinubu as presidential candidate.

APC National Chairman stripped Naked in Nasarawa state over multiple crises rocking the party. The people are unhappy with the direction of the party and the nation. pic.twitter.com/KUikrrnQD6

A strong message to APC and her supporters at Nasarawa today.
You can not be shamelessly campaigning to retain power after all you did to Nigerians in the past 7+ years.

KanyiDaily had also reported how Nollywood actor, Olaiya Igwe stripped naked at a beach to pray for the victory of the APC presidential candidate, Bola Tinubu, in the 2023 general elections.

I Can Never Live In Nigeria Even If Jesus Christ, Other Saints, ‘Amadioha’ Take Over Aso Rock – Nigerian Writer, Onyeka Nwelue