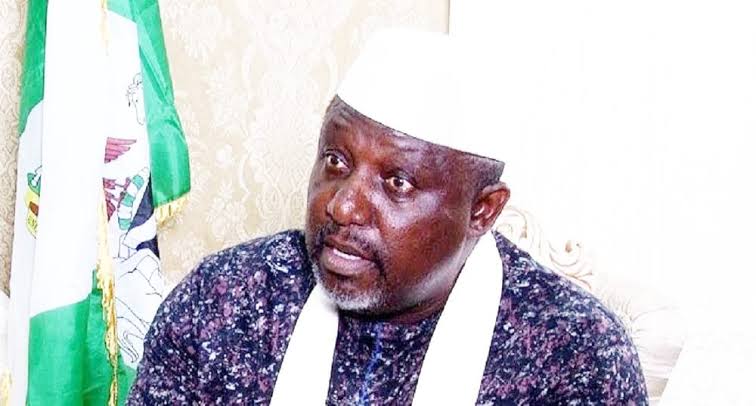 The lawmaker was alleged to have joined the PDP after he appeared in a photo with former Imo State governor, Emeka Ihedioha at a burial ceremony of one of his aides’s mother, Pascal Uju.

Reacting in a statement by his Special Adviser on Media, Sam Onwuemeodo, the senator urged the public to disregard the rumours, stressing the he’s still a member of the APC.

The statement reads: “Our attention has been drawn to a story claiming that the former governor of lmo State and Senator Representing lmo West Senatorial District, Owelle Rochas Okorocha, has joined the Peoples Democratic Party, PDP.

“To add flesh to the false story, those behind it also attached some photographs with Senator Okorocha and a Chieftain of the PDP, Rt. Hon. Emeka lhedioha and others, being in the pictures.”

READ:  Buhari Has Shown Its Possible To Serve Nigeria Honestly And Selflessly - Osinbajo

“Those behind this false story, deliberately failed or refused to mention the venue and title of the event, where the photographs were taken. They could not also quote a portion of Okorocha’s speech, since he is not a dumb man and must have made a speech at the event.”

“They concealed or withheld those vital aspects of every event or story because they would not serve their aim or goal.”

“We are at ease, to say that, Okorocha has not joined the PDP. He is still a member of the APC. Burial ceremony could not have become political declaration rally.”

“Uju was Okorocha’s frontrow appointee. He served Okorocha and his government in various capacities, including being the Deputy Chief of Staff and was his anchor man in the oil producing areas of the State. Okorocha was also instrumental to his going to the House of Representatives on the platform of the APC. There are also a lot of them like that.”

“Uju buried his mother on Friday, December 30, 2022. Okorocha was at the burial because Uju served him and his government with dedication and commitment. Okorocha would not have boycotted the burial because of Uju’s current political party. That would have been most uncharitable and unimaginable, especially when lgbos do not play politics with death and burial, even when the reverse seems to be the case these days.”

“The burial in question created an atmosphere of conviviality, in which case, people mixed up and interacted freely without minding which political parties they belong. Photographers were taking their shots without anybody being conscious of any attendant mischief, since the political leaders were all there for Hon. Uju mother’s burial. lt was not a political rally. lt was also somewhat a carnival because the late woman lived a fulfilled life with the children being handy.”

“Unfortunately, those who play politics with everything, both human and inhuman, circulated some of the photographs taken at the burial and told their audience that Okorocha had joined the PDP. Yet, they could not tell the same audience the venue of the “joining” and what the event was all about.”

“This is New Year! So, we wouldn’t be hard on those behind this cock and bull story. We would only ask God to touch them to know that politics isn’t the end of life. To know that it’s ungodly and high level of wickedness to play politics with death or burial. To know that one day, we shall be judged by our actions, inactions and utterances. lt doesn’t end here.”

READ:  "If Elected President, I Will Pay WAEC Fees For Every Nigerian Child" - Tinubu [Video]

“To also know that, those who played politics in the first Republic and second republic, even third republic, are not the ones playing it today. That is to say, later, if not sooner, those playing it today would become history. We must, therefore, be mindful of the way we play our politics.”

“All in all, we appeal that the general public should disregard the story of Okorocha joining the PDP. lt’s not true! The photographs attached to the false story are not evil since politics is not war. Not a do or die venture. Our only concern was the virus some mischief makers tried to inject into the innocent photographs taken at Uju mother’s burial without malice or those involved being conscious of which political parties all those at the burial in question belonged to.”

“May God grant those behind this falsehood Spiritual transformation and moral rebirth or formatting. They need it, more than ever before. They need to be taught that mischief isn’t a good English word.”

KanyiDaily recalls that Richas Okorocha was recently arrested and arraigned on a 17-count charge of money laundering to the tune of N2.9 billion filed against him by the Economic and Financial Crimes Commission (EFCC).

Related Topics:apcLawmakerNewsPDPPoliticsrochas okorocha
Up Next