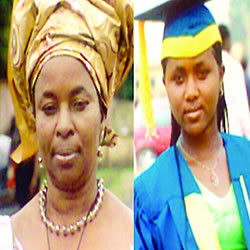 Those that were found dead after the unfortunate meal were Mrs Caroline Umunna, Madam Lucy Obodoeke, Miss Modesta Umunna, Miss Uchenna Umunna, Master Chisom Okorie and Ozioma, their house maid.
For Mr Charles Umunna, the head of the family, who is still in shock, penultimate Thursday night will remain green in his memory as a bitter reminder of the cruelty fate brought him.

Charles was a staff of PHCN Awka, whose wife, Caroline Umunna; two daughters, Uchenna, a first year student of Public Administration, Anambra State University and her sister who just finished School Certificate Examination and UTME; his in-law, Mrs. Lucy Obodoeke, who came for medical treatment; cousin, Chisom Okorie; and maid, Miss Ozioma Marcel; who joined the family three weeks earlier, were found mysteriously dead on Friday, it is a pathetic situation he is trying hard to comprehend.

Possibly because of their trauma and excruciating grief, Umunna and his remaining three children two boys and one girl, have relocated to the house of the Catholic Priest of St. Gregory’s Catho-lic Church, Eziama Uli, Rev. Fr. Joel Ibebuike.