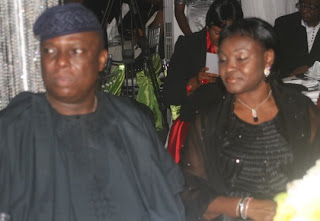 Victor Osibodu, the Vigeo Holdings boss and hubby of the Managing Director of Union Bank, Funke Osibodu is rapidly becoming a force to be reckoned with in the Maritime industry.
Informants divulged that the very low profile entrepreneur recently increased his influence in that line of commerce with two oil vessels.
This addition is said to bring the total number of oil vessels he owns to six.
Insiders revealed that he just perfected the papers for the acquisitions – including insurance- utilizing a closely guarded firm in the United Kingdom.
According to an industry source ‘with Oil vessels, he is certainly not an insignificant player in the sea cargo business’
It is not clear at press time whether financial institution oversee by his wife, Funke has any link with the buying of the two new oil vessels- or any of the earlier four acquisitions.
Vigeo Holdings, the platform on which Victor Osibodu operates is a conglomerate involved in various sector of the Nigeria economy.
The notable Nigerian is the founder and Chief Executive Officer of the company.
An alumnus of Harvard business school – like his wife, Funke – aside Vigeo, he sits on the board of quite a number of companies- including banks.
His wife and Managing Director of Union Bank, Funke Osibodu is listed as a Director at Vigeo Holdings