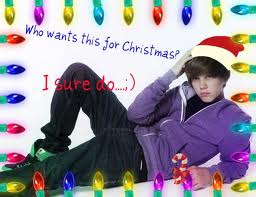 Justin Bieber is busily recording his holiday album, and unlike other similar albums, he plans to load it up with new, original songs—not classic, Christmas tunes.

Justin revealed last Thursday he plans to donate proceeds from the album to charity. He tweeted, “So it’s true…been in the studio doing something special for Christmas. We are going to try and raise alot of money this year for charity”

Sources say the album “is coming out in October and November” and that Justin will go against holiday album tradition, and record his own songs instead of re-doing existing classics: “A secret about the album is that it’s not the normal Christmas album,” says the source. “It has one classic [song] remixed but all the [other] songs are originals, written by Justin and [his] producers.”
Way to be a recording industry trend-setter, Justin!

And the source  also said that Justin is teaming up with “three major stars” on this album, so get ready for some power collaborating! Hmmm…could it be girlfriend Selena Gomez? YouTube sensation Keenan Cahill? Or perhaps he’ll kick it with Chris Brown or Will.i.am?

Whoever he’s chosen to collaborate with, the source, promises, “It is an amazing original album.

Kim Kardashian Buys Pregnancy Tests On Her Honeymoon! Is A Baby On The Way?