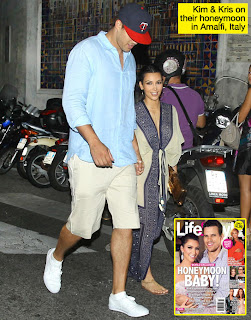 Kim Kardashian and Kris Humphries may have had an adorable third wheel on their romantic honeymoon in Amalfi, Italy, as Life & Style is reporting that Kim purchased several pregnancy tests during the trip! “She came on her own and bought two pregnancy tests,” an eyewitness reveals. “She didn’t speak any Italian and looked a bit embarrassed.”

While the Pharmacy of Arselani’s staff had no idea who Kim was, the source is a huge fan of Keeping Up With The Kardashians, and recognized her immediately. And even though we don’t know the results of the tests — yet — it sounds like it’s safe to say Kim’s got babies on the brain!

“She wants a baby nine months to the day of getting married,” a source close to the Kardashian family tells the mag.
And Kim certainly doesn’t disagree! Here’s what she told Life & Style on Aug. 28 at the 2011 MTV Video Music Awards:
“Am I having a baby? … I just got married! Who knows? It’s no secret that I can’t wait to be a mom. Of course I hope it happens soon. I don’t know if I am right now.”
The newlywed loved Beyonce’s VMAs baby announcement, but admits that she wishes she had a bun in the oven, too! Uh, oh — baby envy!

Meanwhile in a new interview from backstage at the VMAs, Kim Kardashian talks about Beyonce‘s awesome pregnancy announcement and reveals her desire to have a baby with new hubby Kris Humphries ASAP!
“Beyonce is my highlight [of the night],” Kim told MTV backstage at the VMAs Aug. 28. “I mean, I adore her anyway, but it was so sweet. And that’s cool for her to come out and share it at the VMAs because music is her outlet…she chose her home.”
As for starting a family of her own, Kim, 30, admits she wishes she’d already started!
“I would be a mom right now for sure [if I wasn’t famous],” Kim shares. “I love kids. I would have probably done this a lot sooner.” Hmm, “done THIS?” Is Kim hinting at something — is she ALREADY pregnant?

Angelina Jolie Kicks Brad Pitt Out Of The House Over Sexy On-Set Brunette!

Justin Bieber To Record All-New, Original Songs For His Christmas Album! Plus: He’s Collaborating With 3 Other Stars!