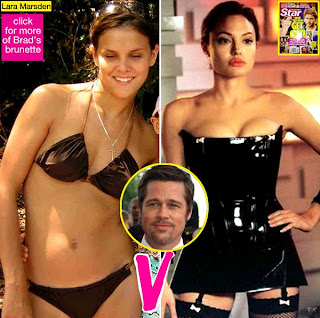 Angelina is furious over the amount of time Brad is spending with his young assistant!

Angelina Jolie stole Brad Pitt from Jennifer Aniston on the set of Mr. & Mrs. Smith and now Angie is worried that his 25-year-old assistant Lara Marsden will steal Brad while he films World War Z!

“Brad spends a lot of time with Lara when he isn’t filming,” a source said “Lara looks after Brad, making sure he is well taken care of and getting him whatever he needs. She even bring tea to his 25-foot white luxury trailer in between scenes.”

And the people around them definitely think something is going on. “You can definitely hear snickers and giggles from the crew members when Lara visits Brad’s trailer alone,” the source adds.

You can bet this isn’t making Angelina too happy. “Angie’s been making her feelings about Brad’s relationship with Lara known for months,” another insider explains. “So when she found out r was still getting cozy with her, Angelina absolutely flipped!”

Things got physical, according to the source, when Angelina confronted Brad — she pushed him against the wall and pointed her finger in his face!

“Angelina was so upset she even kicked Brad out of their house, screaming ‘Get out!,’” the source continues. “She was ranting and raving, threatening to pack up and take the kids away.

Now she’s barely speaking to him.”
This sounds serious! But you know what they say — what goes around comes around!