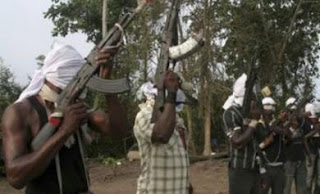 So this Boko Haram people want make innocent Nigerians run commot for them….come to think of it, its not ordinary citizens that killed their leader so why kill them….na waa ooo this thing don tire me.

THE Boko Haram sect, on Tuesday, vowed to continue its attacks until its demands are met.

In an apparent reaction to the report submitted to the Federal Government by the Ambassador Gaji Galtimari-led committee, which called for dialogue and negotiation with the group, the spokesman of the group, Abu Qaqa, in a telephone interview with newsmen in Maiduguri, distanced the group from the report and vowed to continue the attacks until their earlier demands were met.

The Galtimari committee submitted its report to government on Monday, with recommendations aimed at putting a stop to the spate of bombings and killings being perpetrated by the sect in the country.

The Boko Haram spokesperson said that the group was not satisfied with the members of the ”so-called committee” and that those who were advising the Federal Government to involve the Sultan of Sokoto and some emirs in the North-East were doing so at their own peril. According to him, the group regarded the Sultan as government official and not the leader of the Muslim Ummah in Nigeria.

Their demands, according to the spokesman, include severe punishment for those who extra-judicially killed their leader, Ustaz Mohammed Yusuf and other members of the sect in the July 2009 uprising, reconstruction of their places of worship, which were destroyed by security agencies in Maiduguri and other states of the federation, immediate release of all their members, who were detained, while appropriate compensation must be paid to them for all their properties destroyed by security agencies in the country..Meanwhile, the Chief of Army Staff (COAS), Lieutenant-General Azubuike Ihejirika, has revealed that some foreign countries are in league with members of the deadly Islamic sect, Boko Haram and are providing them with facilities for terror.Although the army chief did not name the foreign countries involved, he said Boko Haram members received funding and training from such nations.

General Ihejirika made the revelation on Tuesday, while fielding questions from newsmen at the Chief of Army Staff Third Quarter Conference 2011, at the Army Headquarters Command, Officers’ Mess, Abuja.

He added that the sophistication of the arms, equipment and other instruments of terror recovered from arrested suspects of the deadly sect also bore testimony to their foreign links.

Asked to confirm if ousted Libyan president, Muammer Gaddafi’s s men had entered the country, General Ihejirika said he had not got any definite report on such and, as such, could not confirm the claim.

The army chief, however, stressed that the military would live up to its responsibilities and cooperate with other security agencies to checkmate the sect and ensure the safety of Nigerians.

On the release of the Boko Haram suspect, Ali Tishau, by the Defence Intelligence Agency (DIA), the army boss said the police and the agencies involved were in a better position to address the issue, but he assured that the army would ensure that the menace of the Boko Haram was brought to an end.

He said it was in recognition of this behaviour among their personnel and the urgent need to bring it to a stop that the Chief of Army Staff agreed that they should conduct an appraisal of their performance in internal operations, with a view to improving the current standard.

Meanwhile, there was a revelation at the venue of the court martial of Brigadier-General Muraina Raji of how the Boko Haram suspects escaped from Wetland detention in Bauchi by a witness, Lance Coporal Abu Ali, a soldier on guard on the day of the escape.

When the court-martial finally took off on Monday, the first witness, Lance Corporal Ali, narrated how the escape happened.He said when the second soldier on guard duty went to eat, one of the detainees requested for water, adding that he went to fetch the water and left his rifle on the floor to open the cell and, at that point, the detainee shouted Allahu Akbar and attacked him.According to him, the other detainee came out of another cell and both of them swooped on him and locked him in the cell. As he went on, the prosecutor objected to the evidence, but the court overruled the objection.The court fixed today for the final written address of the defence, as the prosecution presented its address on Tuesday.