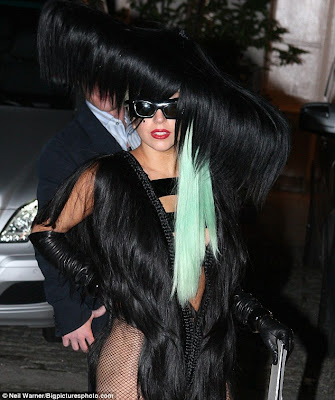 We’ve seen her in a dress made of meat,
another with Kermit the frog toys attached and a bodysuit with a built-in
pregnant belly.

But it seems Lady Gaga may have finally run
out of shocking outfit ideas.

The 25-year-old singer was spotted at the
Roundhouse in Camden, North London at the HTC and Beats Audio party wearing a
wig dress made entirely out of hair.

And, while different in colour, the outfit was
very similar to the hair dresses Gaga wore on two separate occasions last
year.

She donned the first in July, taking to the
stage during her Monster’s Ball tour wearing a blonde outfit made of hair,
before wearing a different version to perform in New York last
October.

Continue to see pictures of her wearing the same design in the past.