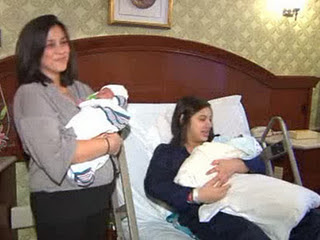 December 21st was a big day for 17-year-old Brianna Guerrero, she became a big sister. But she also became a mother.

Brianna Guerrero gave birth to a healthy 9 pound 9 ounce son named Ayden at 6:52 a.m. Wednesday, only 6 hours after her mother, Jessica Rotter, gave birth to Ayden’s uncle.  The mother and daughter pair, who were not due to deliver on the same day, gave birth one room apart at Alexian Brothers Medical Center in Elk Grove Village, Ill.


“This is the first time I’ve seen this,” said Dr. Alex Lipovich, Brianna and Jessica’s doctor. “I’ve had mothers and daughter who were pregnant at the same time in my practice before, but to deliver within a few hours of each other is a first.”

The births went smoothly according to  Lipovich, and both new mothers were very happy about the additions to their family, “although the mother was little disappointed that she couldn’t be there to comfort her daughter.”

Both children are expected to be released from the hospital today, just in time to be home for the holidays.

But that’s not the only fascinating family birth to occur in recent days. Twin sisters Danielle and Nicole Fisher both gave birth to sons at a Virtua Hospital in Voorhees, N.J., last Tuesday night.

The sisters, who had due dates roughly two weeks apart gave birth within 13 minutes of each other, according to the Courier Post.

The Courier Post reports that both sisters still live at home with their mother meaning that the newborn cousins, Johnathan and Maximus, will grow up just like their mothers, sharing more than just a birthday.

PICTURE OF THE DAY: Elton John, His Gay Partner And Their Son