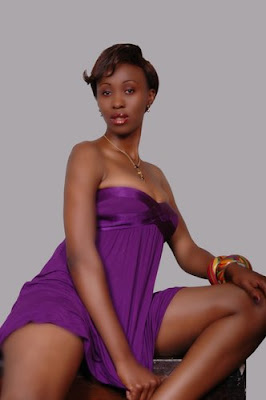 It is no longer news within Nollywood circle that Big Brother Amplified housemate and Kenyan representative,who is a top actress in the Kenya movie industry, Millicent Wambui is making every move to find her feet in Nigerian movie industry.

As gathered from reliable sources,Mr. Onyeso contacted Ms. Wambui through the popular social network, Facebook immediately after BBA. He allegedly swept the pretty entertainer off her feet with accolades of how much he enjoyed her stay in BBA house and all the display of her acting talents in Kenyan movies. Mr. Onyeso was said to have informed her that she can fit into the Nigerian film industry and that he will readily assist her with everything she wants when she decides to come to Nigeria.
According to the sources,Mr. Onyeso invited her to Nigeria for the very first time to give all their plans a first shot.

Ms. Wambui on that visit, was said to have nowhere to stay in Nigeria, but accommodation was made available by this movie producer who became so close to her within this time.
Insiders say they were spotted at strategic places during the period. Their business kicked-off officially with Mr. Onyeso allegedly collecting undisclosed amount from her to manage publicity in Nigeria.
The story of her arrival to the industry and her aim was published in few Newspapers, afterwards the whole money disappeared without result.

However,the source informed that other things which transpired between our dear movie producer and this Kenyan actress remained undisclosed, as she allegedly spent periods of her earlier visitations to Nigeria in his house.

The forgoing information would have remained cemented if not for the misunderstanding that kicked-off between them few months back. The fight was said to be so severe that Ms. Wambui was forced to open up to few friends in Nigeria. First she packed her things to a popular hotel in Allen,Ikeja where she is still staying till now.