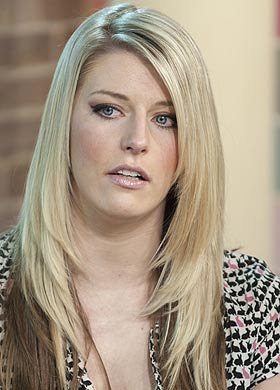 Hazel Jones, 2, revealed her rare condition – known as uterus didelphys -on This Morning this month.


Hazel is proud of her condition, known as uterus didelphys.
When a girl is born her uterus starts as two tubes, then a septum barrier should break down and one uterus forms.
But in Hazel’s body, the two tubes have made two separate uteruses and two vaginas and two cervixes.
It was in her late teens when Hazel realised that her body was different to her friends’ and had a septum dividing her two uteruses.

Hazel revealed she had to lose her virginity TWICE as she had two hymens – the membrane that surrounds the external vaginal opening – to break.

Hazel’s proud hubby Riki said: “Hazel’s body may be different but it’s not something you notice unless she tells you and I wouldn’t change her for the world.

Hazel appeared on ITV’s This Morning, and Dr Dawn Harper said of her body: “Although it is relatively common to have a septum within the uterus, to actually have two separate uteruses is much rarer – one in a million.”

I trust oyibo, the turn everything into a money making avenue……