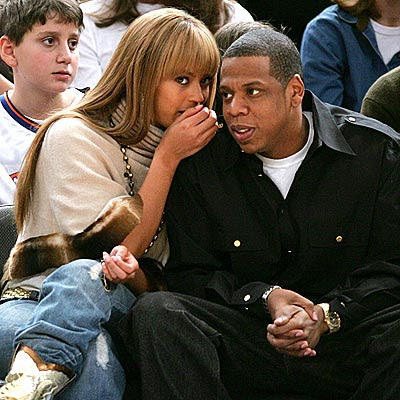 If Kim Kardashian thought she would become BFF’s with Jay-Z and Beyonce because of her romance with Kanye West then the brunette is going to be bitterly disappointed as the couple have reportedly banned her from their inner circle.

In an embarrassing development it seems the A List couple have no intention of ever socialising with the reality TV star and have warned Kanye West that she is not welcome.

“[Beyonce] wasted no time in banning Kim from being invited into their inner circle, which is exclusive to say the least,” an insider told Heat Magazine.

“Beyoncé is used to hanging out with Chris Martin and Gwyneth Paltrow- she’s in a totally different league.” They added

It seems the ‘Love On Top’ star is unimpressed by Kim’s rise to fame and exploitation of her personal life, something Beyoncé has kept strictly private.

“Beyoncé doesn’t want to bring that reality show infamy and drama into a personal life.” Another source told HollywoodLife.com.

“The Beyoncé the world knows and the Beyoncé/Jay-Z that her close friends know are completely different and she wants to keep it that way.”

It isn’t just Kim’s love of the camera that seems to have rubbed the mega-star up the wrong way, The new mum reportedly thinks Kim is “tacky” as well.

While the birth of baby Blue saw the couple shell out thousands to ensure privacy, Kim made millions from putting her wedding day on TV something the ‘Countdown’ star would never do.

No double date then?!