The victim, identified as Mr. Erite, was trailed by suspected cultists to a beer parlour on Jubilee road, Ovwian, at about 7:30pm, for yet unknown reasons.


According to a dependable source, the suspected cultists unleashed terror on Erite, using dangerous weapons, ranging from clubs to cutlasses.

Speaking to Vanguard on condition of anonymity, a police source said the assailants bathed Erite with acid after inflicting multiple cuts on him, leaving him dead.

He said: “The cultists left the butchered body of Mr. Erite and went to burn the residence and brothel of one Mr. Biggy at  Owhase before escaping.”

In a reprisal attack, youths, who were peeved by the alleged gruesome murder of  Erite, numbering hundreds, thronged the streets of the community in search of the suspected killers.

They lamented  that several cars and other valuables were destroyed in the process.

He added that the police was determined to unearth the circumstance that led to Erite’s death. 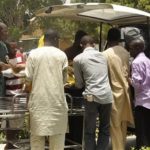