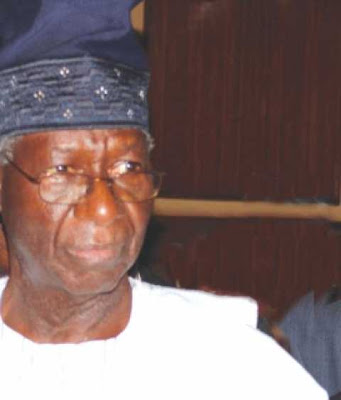 Governor Adams Oshiomhole of Edo State today obliquely referred to Tony Anenih a member of PDP’S board of trustees as the mastermind of in the assassination of his private secretary.
In a tearful speech earlier today, the governor said, ” a certain old man, in his 80s, a godfather, in Edo state is the mastermind of the assassination of Olaitan Oyerinde

Even though he stopped short of mentioning Chief Anenih’s name, sources within the Edo State government are accusing Tony Anenih of being behind the horrific act.

Olaitan Oyerinde, the Principal Private Secretary to Governor Adams Oshiomole of Edo State, was assassinated at his home in the early hours of Friday, May 4.

“Chief Anenih has a nest of killers at his disposal, and we believe he was behind this cowardly act,” said a senior aide of Mr. Oshiomole.

According to this aide as well as other officials of Edo State, Mr. Anenih had sworn to wrest the reins of power in Edo State from Governor Oshiomole and the Action Congress of Nigeria (ACN) “by all means necessary.”

Mr. Anenih has a reputation as an expert in the use of violence to achieve political aims, especially in stealing elections. Former President Olusegun Obasanjo had articulated the approach as a “do-or-die affair”.

A source in the Edo State capital of Benin City told SaharaReporters that members of Oshiomole’s cabinet as well as ACN leaders in the state are discussing the allegations against Mr. Anenih and the PDP as well as an appropriate response to the PDP’s plan to cause mayhem in the state as part of a strategy to manipulate the forthcoming gubernatorial election in the state.

“Believe me, we know that Chief Anenih is the chief architect of this homicidal quest by the PDP to seize power in Edo State.”

Another source told SaharaReporters that the allegations are strengthened by a recent encounter between Louis Odion, the Edo State Commissioner for Information, and Mr. Anenih, one of the principal leaders of the PDP, a party that Nobel laureate Wole Soyinka once called a “nest of killers.” Mr. Odion has told friends and associates that when he recently ran into Mr. Anenih at the palace of the Oba of Benin, the PDP chieftain threatened to “deal with him soon.” A few days after the alleged encounter, Mr. Odion, a former newspaper columnist, barely and providentially escaped an assassination attempt—because he was invited to the home of his colleague after a late night meeting.

Several sources told SaharaReporters that assassins visited Mr. Odion’s home around the same time that the assassins who killed Oyerinde struck. “The killers couldn’t find Odion because he had stayed the night in the house of a colleague,” said a source. The source added, “The Commissioner for Information owes his life to his decision not to go home that night.”

Our sources disclosed that Mr. Odion suspects that the assassination attempt was directly linked to the threat issued by Mr. Anenih.

Even though elements within the PDP wanted the world to believe that what happened to Oshiomole’s convoy was an accident, the assassination of Mr. Oyerinde, the governor’s chief strategist, is seen as the validation of “the elaborate plan by the PDP to eliminate as many people as they can around the governor, if not the governor himself. The whole plan is to be able to create fear and muddle the waters before the coming elections, which they know they cannot win”, said a source close to the governor.

A prominent politician in Edo State told our correspondent, “What we are witnessing in Edo State is the continued impunity of this cabal of killers which has remained unchecked since the time they assassinated Chief Bola Ige, Chief Harry Marshall and Chief Dokibo.” The politician said the cabal had also assassinated many others and got away with it. “They know that they have the protection of their party in power with its control of all the security agencies. You have a cabal of killers that could kill the Attorney General of the Federation and get off free and even get one of those accused to become the chairman of a major committee in the Senate.

The politician, who emphasized that the “callousness of the PDP’s cabal of killers has to be advertised to the civilized world,” added that “only recently the notorious Iyiola Omisore, who was alleged to have been implicated in the assassination of Bola Ige and was freed by the courts in a very scandalous trial process, openly threatened to illegally stop the convoy of the Governor of Osun State and waylay the governor.

He was not even invited by the police for questioning. This is the legacy of Obasanjo’s ‘do-or-die affair’ that the likes of Anenih helped to institute.”

The politician disclosed that people like Mr. Anenih and the top echelon of the PDP pose a grave threat to Nigeria’s shaky democracy. “Perhaps the only option left to the people is mass uprising against the reign of impunity of the PDP and its leaders. Nigerians should not stand around and wait for the next victim.”

In its reaction to the murder of Mr. Oyerinde, the Nigerian Labor Congress (NLC) stated: “The way the politics of Edo State is going is reminiscent of the First Republic politics in the old Western Region which led to tragic consequences for the entire country.”

On his part, Professor Wole Soyinka deplored the killing of Mr. Oyerinde, vowing, “the agents of darkness and retrogression will not triumph.”

In a text message on the issue, Mr. Soyinka said, “The hand of the assassin is clear as day. It reaches all the way back to the killing of Bola Ige. Please convey my deepest condolences to his (Oyerinde’s) widow, children and colleagues. 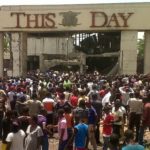