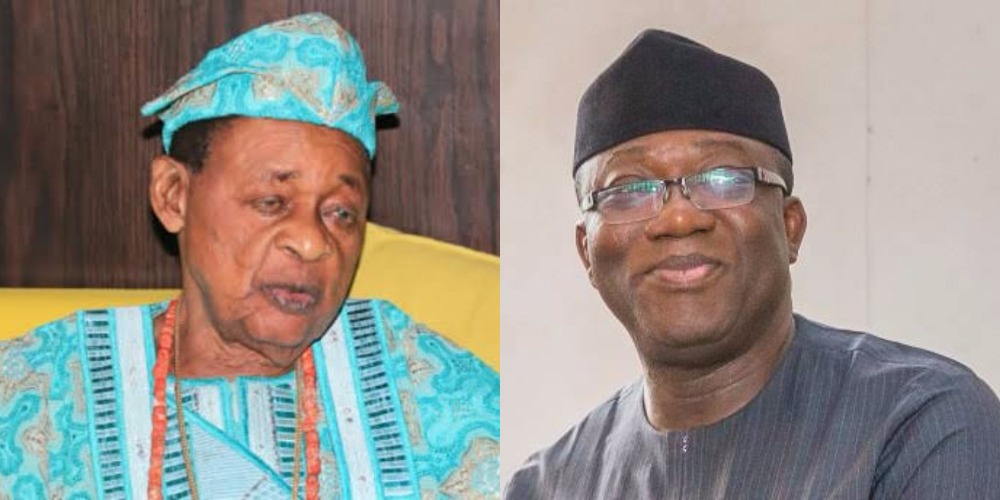 The Alaafin of Oyo, Oba Lamidi Adeyemi, has issued a warning to Ekiti State Governor, Kayode Fayemi, over alleged attempt to dethrone some prominent traditional rulers in the state.

KanyiDaily had reported that Governor Fayemi issued a query to 16 prominent traditional rulers in the state over alleged insubordination.

In the query, Fayemi gave the kings 72 hours to explain why they should not be removed for shunning monthly meetings of traditional rulers and government functions since August 2019.

Reacting to the query in a latter dated March 12, 2020, Alaafin of Oyo warned Fayemi against treating the traditional institution in Yorubaland with levity.

The Alaafin said he wrote the latter on behalf of other prominent traditional rulers in Yorubaland, including the Ooni of Ife, Oba Adeyeye Ogunwusi; the Awujale of Ijebuland, Oba Sikiru Adetona; and the Alake of Egbaland, Oba Gbadebo Adedotun.

In the latter, Oba Lamidi Adeyemi explained that the 16 Obas were absence at the council meetings and state official functions since last year, because Fayemi appointed their subordinate as the chairman of council of Obas, and they refused to bow for him.

“Your Excellency’s neglect of the hierarchical order by appointing a subordinate Oba as the Chairman of the Council of Obas and Chiefs in the State over and above the recognized order It was therefore with total displeasure and indeed total discomfort that we learnt of,” the latter partly reads.

“In a free society like ours, nobody should expect those injured by that assault to keep quiet. As civilized people, rather than confronting or engaging the government they chose the court option.”

“Since the case is still in court, we will not want to comment further on it as a law-abiding citizen. I, however, expected that your Excellency waits till the end of the court process before acting on the matter,” Oba Lamidi noted.

The monarch, however, concluded that Mr Fayemi should tread softly when dealing with traditional institutions. Let us employ diplomacy to settle this issue, the Oyo monarch advised.

Read the full letter below:

“Suffice to say, Your Excellency that in any human society and more so in Yoruba Land, order of hierarchy and seniority are of vital consideration in position placement.”

“The traditional rulers said from Immemorial Obaship leadership in Ekiti land had been within the 16 Obas without any dispute or quarrel among them and indeed to the admiration of other Yoruba Kingdoms.

“It was therefore with total displeasure and real discomfort that we learnt of Your Excellency’s neglect if the hierarchical order by appointing a subordinate Oba ad the Chairman of the Council of Obas and Chiefs in the State over and above the recognized order.

“In a free society like ours, nobody should expect those injured by that assault to keep quiet. As civilised people, rather than confronting or engaging the government, they chose the court option.

“Since the case is still in court, we will not want to comment further on it as law abiding citizens. I however would have expected Your Excellency waits till the end of the court process before acting on the matter.

“It is in this note that I, along with fellow Traditional Rulers across Yoruba Land feel very sad that Your Excellency issued query to the sixteen Ekiti Crowned respected Traditional Rulers of high esteem in Yoruba Land for not bowing their heads to their subordinate by not attending the council meeting under their subordinate. That exercise and without mincing words is to say the least subjudice.

“We consider it important to go Memory Lane with you on the rile of Pelupelu Obas in Ekiti Land in the development of Yoruba Nation. This is particular with Ekitiparapo War which is very famous in Yoruba War History as Kiriji War (1870 – 1886).

“Suffice to say that in the course of the sixteen year-old war, the battle became so internecine and threatening that the Alaafin as the head of the Yoruba Nation had to write to the British Authority to mediate in bringing the war ti an end. This led to the Treaty of Peace of 1886 between the British and Yiruba leaders under Alaafin’s leadership.

“We go into this history to let Your Excellency know that Yoruba had far reaching history than many races in the country. Unlike some other races, Traditional Rulership in not banded by religion but by Tradition and Culture. That explains the difference between us and some other cultures. Whereas, some races see deposition and installation of Traditional Rulers as mere administrative routine with executive fiat all in open glare, that is not so in Yoruba Land.

“To some races, nothing outside the mundane is attached to their Traditional Institution. Whereas, that of Yoruba is beyond the mundane as it is also ancestral and spiritual. The Yoruba Oba is the representative of the ancestors, the real owners of the land or ground.

“It is ironic that while the processors In-office and ancestors of these sixteen Crown Obas (Pelupelu) famous Ekiti Kings and their subjects displayed uncommon patriotism, courage and commitment to confront the intimidating military powers of Ibadan Army for sixteen years, 1870 – 1886 that, Your Excellency as one of the beneficiaries of the legacy bequeathed by these Kings of Yoruba History is now embarking on an exercise that will rubbish the contributions of your ancestors.

“Finally, as fathers we should like to advise Your Excellency to tread softly any relationship with Traditional Institution in the name of Oduduwa and our other ancestors in Yoruba Land. Let us employ diplomacy to settle this issue. We have the mechanism of conflict resolution in ways of our ancestors.” 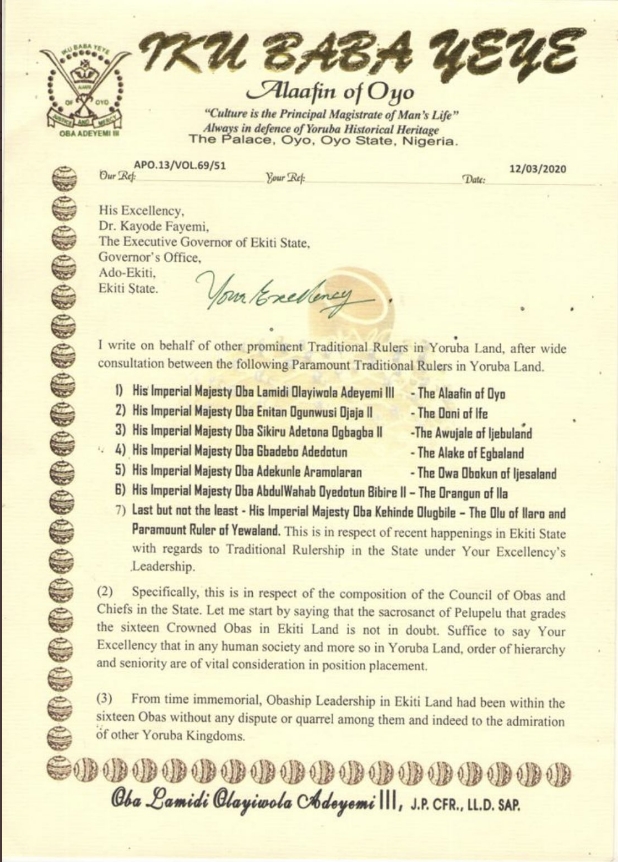 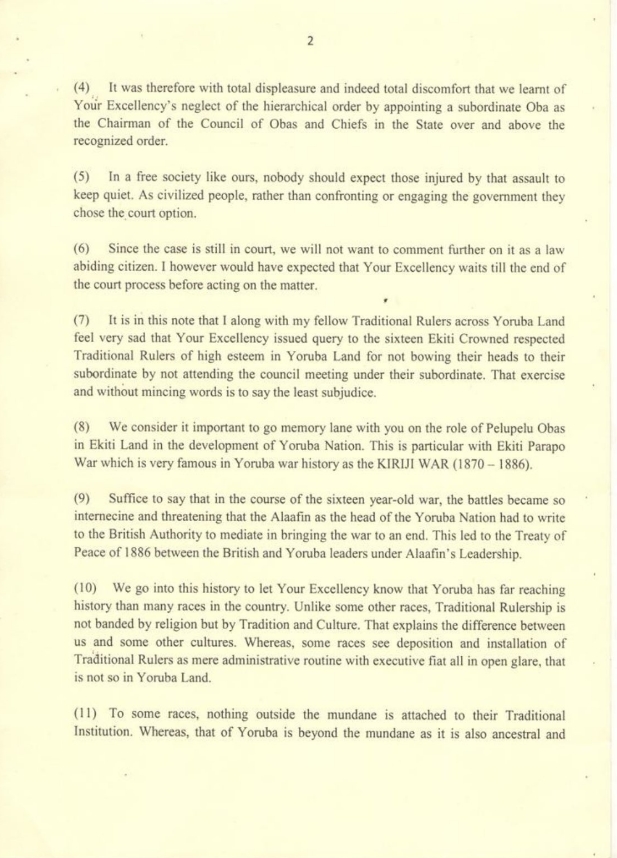 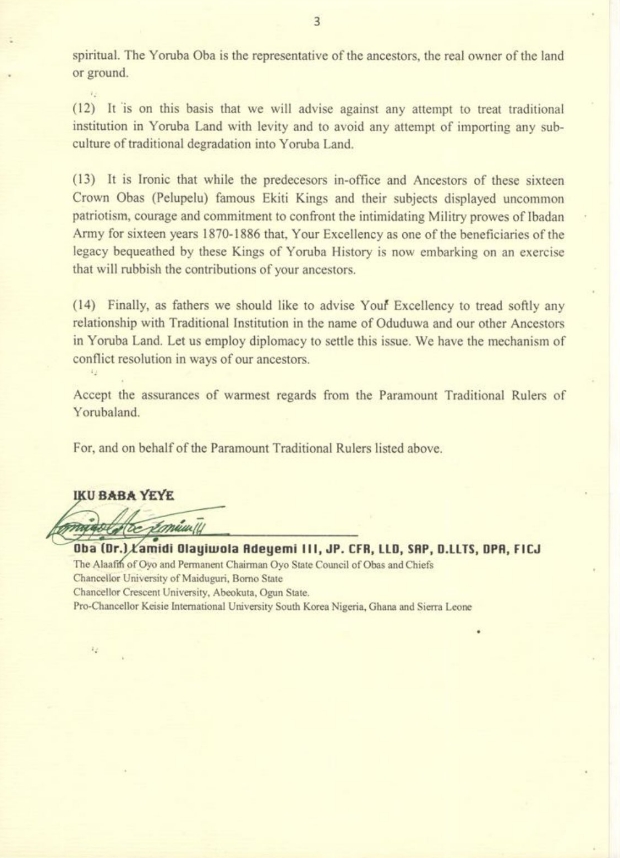 This is coming following the successful dethronement of Malam Muhammadu Sanusi as the Emir of Kano by the state governor, Umar Ganduje. 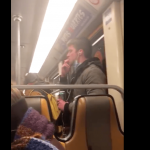 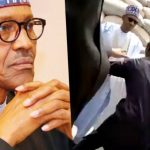