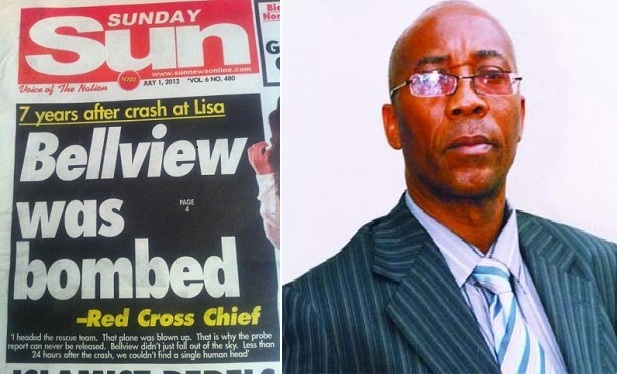 Seven
years after the crash of Bellview Boeing 737 flight 210 plane at Lisa,
Ogun State,  in which 117 persons died, it has been revealed that the
aircraft was bombed. The  Abuja-bound aircraft that took off from the
Murtala Muhammed International Airport, Ikeja, on October 22, 2005,
crashed few minutes after it was airborne….continue reading…
A top official of the Red Cross, Professor
Charles Ohiku, made the startling revelation in an exclusive interview
with Sunday Sun in Lagos. Prof Ohiku, who led the Red Cross rescue team
at the crash scene, said that unlike the recent Dana plane crash, no
human skull was found at the scene of the Bellview crash because it was
blown up.
“I headed the rescue team at the Bellview
plane crash site at Lisa, Ogun State. That plane was blown. That is why
the probe report can never come out till tomorrow.  “That plane didn’t
just drop from the sky. By the time we got there the following morning,
we could not find even one human head.
“You know, at the Dana plane crash site
some incomplete human bodies and heads were recovered from the crash
site. But in the case of Bellview crash there was no single head or a
skull. Quote me. “I was there as a representative of the Nigerian Red
Cross, and I can tell you categorically that no single skull was seen or
picked up in a crash of that magnitude and the number of passengers
involved.
“How can anyone explain the fact that with
117 passengers and crew members in the plane no single head or skull was
found during rescue operation, even though there was no survivor?”
Asked why anyone would bomb the plane at that time when there was no
Boko Haram or any other serious security threat  to the country, Prof
Ohiku said some people might have felt that somebody in that plane, who
was considered  too close to the President at that time, was being
groomed to take over from him.
He recalled that Dr Iyabo Obasanjo, who was
then Commissioner for Health in Ogun State, gave his team a note to the
General Hospital and, “then we packed them (mangled bodies) in a case,
the one they use in packing corpses.” The Red Cross chief was emphatic
that there was no single head, “even as strong as the skull is,” when
his team got to the scene.
“My parents had been at Lisa 10 years
before that crash, so immediately the plane crashed I was one of those
who got there first in the morning. And many people didn’t know where
Lisa was before the crash that brought the quiet village to limelight.”
He
continued: “Why have they not released the black box findings? They
will not do so even till tomorrow. And you all know the personalities in
that plane. One of them was Waziri Mohammed, chairman of the Nigerian
Railway Corporation (NRC) then. Majority of the people on that plane
came from Ota Farm to board the plane. They came from Ota Farm to Lagos
to board that plane at Ikeja Airport, and the plane landed at Lisa, Ogun
State, imagine that.
“The general rumour at that time, mark my
word, was that Obasanjo was preparing that very man, the NRC chairman,
for the presidency. We found legs, hands and some other human parts, but
no head. I would like somebody to explain how that came about,” Prof
Ohiku said.
Among those who died in the
crash were Chairman of the Nigerian Railway Corporation (NRC), chairman
of the defunct People’s Bank, Mrs Maria Sokenu; and the Post
Master-General of the
Federation, Alhaji Abubakar Argungu.
Also on the list of casualties were the
Personal Assistant to the Post Master-General, Mr S. Eneware; chairman
of Nigerian States and Local Government SMEs, Mr J. Agharitte; and Mr
L. Adele, a South African television producer.