The controversial story linking the area father, Charly Boy, to gay
activities is far from being over. While the former PMAN President has
denied the report and even asked his lawyer to sue National Mirrow, a
paper owned by popular Billionaire, Jimoh Ibrahim, Olu gathered that another publisher has declared that he has a “tape” that
will expose the truth.

Ed Jatto, the publisher of Danfo Express, has reacted to a press release
by Charly Boy on the matter. He said his credibility is at stake and he
will not allow anyone to embarrass him. “I find it laughable that
Charly Boy is subtly backtracking now,” said Jatto.

“He knows I
have the tape, I told him when he asked me, and if he had asked to
listen to it then, I wouldn’t have minded playing it to him. As it is
now, I am not interested in playing it to him at any kangaroo press
conference.

“Charly Boy believes so much in suing people. We all
know he has sued National Mirror and now he wants to sue me too. So,
I’ll just say he should go ahead and sue and we’ll meet in court where
the tape will eventually be played for the whole world to hear,” he
assured.

Jatto disclosed that he is also preparing to sue Charly
Boy as soon as the truth comes out. “I like men who stick to their
words, which he hasn’t done. When the tape is played in court and I’m
vindicated, I would press for damages because he has caused me
considerable embarrassment. It is too late for him now to start asking
me to bring the tape to a press conference,” he said. 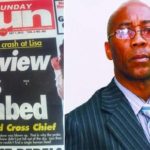