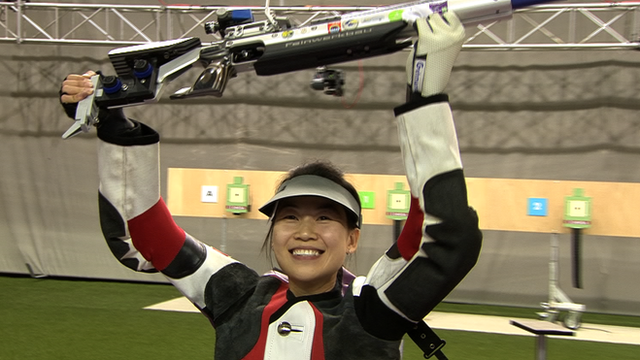 In a tense contest watched by International Olympic Committee
president Jacques Rogge, Poland’s Sylwia Bogacka took silver after a
fierce battle for the top spot while Yu Dan of China clinched bronze. Yi, 23, who won the title at the 2010 world championships in Munich,
had a total winning score of 502.9, 0.7 points ahead of Bogacka, on
502.2. Yu finished with 501.5. Defending Olympic champion Katerina Emmons of the Czech Republic finished fourth.

“It’s very exciting. Very happy. I’m very grateful to China. And to my mother and father who I love very much,” she said.

“I am pleased, not nervous like I was in the competition. I have been
up since five this morning. There was a lot of pressure on me,” she
added.

And Yi said being Olympic champion would change her life.
“I think I myself have changed. I feel like I’ve grown up and then I
think this is going to bring some changes to my life as well.”

Bogacka earlier finished top of qualifying with Yi in second place
and the two were locked together in an agonisingly tight duel in the
final which started with both scoring 10.8 out of possible 10.9 in the
first shot.

But Yi held her nerve under intense pressure, taking advantage of
some slips from the Pole, grabbing the title with 10.3 and 10.5 in her
last two shots.

Bogacka slipped to third after the ninth shot but her final effort (10.8) lifted her into the silver medal position.

“Amazing, really, really amazing. The people were amazing. I’m very
happy,” said the Pole, 30. “I have been shooting for 18 years. This is
everything to me.”
When asked where she felt she lost the gold medal, she said: “I shot one 9.7, I think that was the reason I fell down.”

The top eight competitors from the qualification round reached the
final, shooting a further 10 shots, each fired individually under timed
conditions.