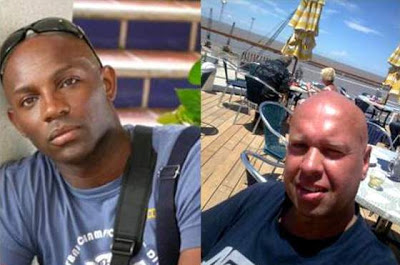 It’s either Chika is messing with Stella Dimoko Korkus…or they are both just messing with the rest of us.  Chika is the gay Nigerian who lives in Germany and is married to German Mark Schwartz who said sometime ago that his husband padlocks his manhood…read about it HERE

The interview between Chika and Stella was in Encomium mag last week…..continue.

Chika: I’ve been having some strange feelings inside me

Chika: Waking up late, sleeping early. My waist is at times hurting me and I keep spitting and almost vomiting. As I am talking with you now, I am running a temperature, and the worst is my legs are heavy as if its swollen. I am not just myself as I always have fainting spells and I don’t know what to do.

Stella: What you are describing is like pregnancy symptoms but you are a man so how can you be pregnant?

Chika: I don’t know o my sister. I am afraid I don’t want that because I have had it once and it was taken out and now again, after a year and some months, it’s back again.

Stella: You were pregnant before?

Chika: Yes. Please pray for me. Before such has happened but not the same feeling like now. Then I was three weeks pregnant.

Stella: How is it possible? You have a womb?

Stella: So how did the doctor abort your last pregnancy?

Chika: The doctor cut my tummy open from under my navel down the last time. Let me rest now please, you are making me panic. I don’t want anything to happen to me, I don’t want to die.

This is really cracking me up…Could it really be true?