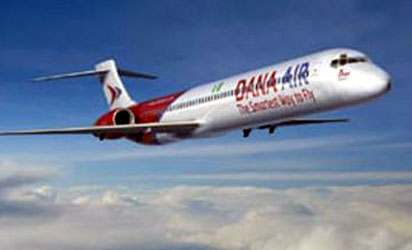 NINETY-EIGHT days after the Dana Airline
plane crash in Lagos, which killed 153 persons, the Federal Government,
yesterday, cleared the airline to resume operations eliciting outrage in
the polity.

Minister of Aviation, Princess Stella Oduah, in a statement by her
Special Adviser (Media), Joe Obi, said government decided to restore the
operating licence of Dana airline because it was satisfied with the
air-worthiness of the airline after a rigorous technical, operational
and financial audit was conducted.(Please find time to read THIS and THIS

The operating licence of Dana Airline was temporarily suspended
following the crash of one of its aircraft on June 3, in Lagos as a
safety precaution”……Something is definately fishy….Air Nigeria sacked all their staff and went out of operation…and some hours later, Dana Air’s license has been reinstated..Two things are involved! Either Dana Air has paid their way out or Air Nigeria has borrowed them their planes or worse still, this officials are just plain stupid and toying with Nigerians, shebi cos their family member was not involved…

Question of the day: Would you fly Dana Air?