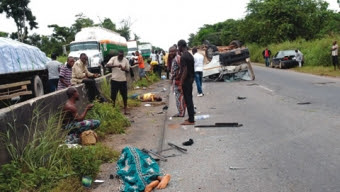 I told you HERE about the bus, Update on it shows that only 12 dead bodies out of the 33 passengers whose bus plunged into the river at J4 – Ogbere axis of Ogun State last Friday have been recovered. This followed the rescue operation carried out at the scene of the accident by a combined team of security operatives and the state health workers. ….continue reading

Sunday Mirror gathered that it took the collaborative efforts of the police, state Traffic Compliant Agency (TRACE), officials from the state Fire Service, Ambulance Service, Federal Road Safety Corp (FRSC), National Emergency Management Agency (NEMA) as well as that of the Federal Road Maintenance Agency (FERMA) and the Red Cross Society before the 12 dead bodies could be recovered in the nine-hour operation.
Bodies of 11 women and that of the driver were recovered from the Federal Urban Mass Scheme Hyundai bus with Abuja registration number BWR 428 XA. The victims, mostly women who are 21 in number, were travelling for a burial at Uronigbe in Oriohwon Local Government Area of Edo State.
Speaking after the recovery operation, the Ijebu- Ode unit commander of FRSC, Mr Issa Seidu, who confirmed the 12 bodies recovered, said three people were rescued on Friday night and were rushed to a private hospital in Ore. 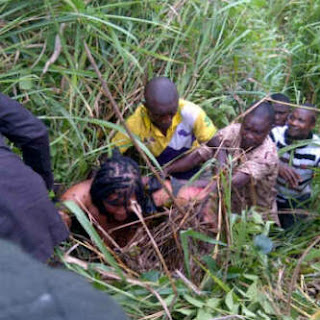 The fully-loaded 36-seater luxurious Hyundai bus with registration number (Abuja) BWR 428 XA had skidded off the dual carriage bridge and plunged into a river at the J4, Ogbere- Ijebu stretch of the Sagamu-Ore expressway in the Ijebu East local Government Area of Ogun State on Friday.
Occupants of the bus, which was said to be travelling to Benin in Edo State from Lagos for a burial ceremony, immediately got drowned and were swept away from the point where the bus had entered into the water, with 33 out of the 36 passengers on board getting killed.
Three of the 36 passengers that included a pregnant woman survived the accident with most of the victims said to be women.
Speaking on the efforts at recovering the bodies of the victims yesterday, the TRACE Corps Commander, Ayo Sangofadeji, told Sunday Mirror that state officials, including the Permanent Secretary in the state Ministry of Health, Dr. Tunde Olowonyo, and Special Adviser to the State Governor on Health, Dr. Rotimi Ogungbe, were all on ground to ensure that bodies of the victims were recovered.