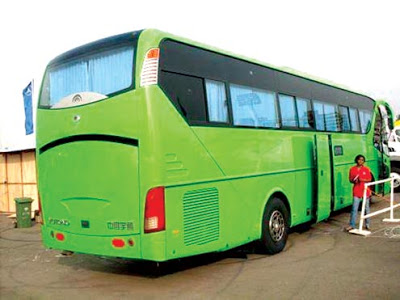 Passengers of a luxury bus entering Kano yesterday survived an attack after improvised explosive devices were thrown at the vehicle by unknown attackers near Malam Aminu Kano Teaching Hospital.

This is happening a day after a bomb went off  in Kanoand  injured four people .It was gathered that the incident happened around 8pm, when the multiple-seater bus was heading to Sabon Gari to discharge passengers.

Another account, however, said only four persons were on board the vehicle when the incident happened, adding that all the passengers had earlier been dropped at a park in Na’ibawa, less than half a kilometre away.

It was gathered that the explosives, which were made of drink cans, did not cause damage to the vehicle or result in casualty. However, mobile policemen cordoned off the area and blocked section of the Zaria Road for over an hour.

Related Topics:bomb thrown at luxury bus in kanoNewsPHOTOSPEAKS
Up Next

Reasons why Ojukwu disowned Sylvester as first son in his Will