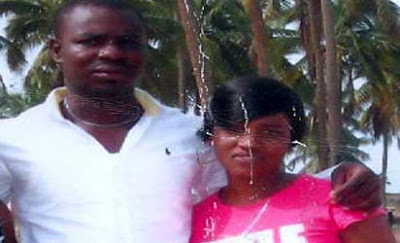 The Aleato family has been thrown into sorrow following the murder of their 26-year-old daughter, Onyinyechukwu, last Saturday by her ex-boyfriend in Lagos.

The deceased, a sales girl at Alaba International market, Ojo, was reportedly trailed by her ex-boyfriend, Osita Amanunwa from her Iba new site abode, to Ajangbadi area of Lagos, where she had gone to visit a friend.

Crime Alert gathered that the late Onyin, as she was fondly called, sat outside her host’s compound, exchanging banters, without the slightest inkling that death lurked at the corner.

Eye witnesses said she turned and suddenly, the smile on her face disappeared. And  when her  host turned to the direction of her gaze, they discovered  that her ex stood  opposite them.

Her host  who spoke on condition of anonymity, told crime Alert that: “ she greeted him but he hissed and walked away. He later came back and beckoned on her to come. She excused herself and left…”.
Singular response

He paused at this juncture,quivering with fear. That singular response happened to be Onyine’s greatest undoing because unknown to her,  Osita had a sinister motive up his sleeves.

This was confirmed moments later, following a desperate  shout for help from the isolated meeting point at number 4/5 Abike Ogunlana close, at about 9pm.  At first, no one suspected it could be Onyine.
But after waiting for a while, her host decided to check on her, only to see Onyinye in the pool of her own blood with a knife still thrust in her neck. From all indication, it was obvious that she tried to put up a struggle  in order to free herself from the assailant’s grip.

She was also discovered to have managed to crawl from the isolated spot to an open area. But her strength apparently failed her midway, owing to   much loss of blood. Unable to crawl further, she  stopped,  clutching firmly to the earth as if rescue  would spring out of it. Osita on the other hand, was nowhere to be found.

Cause of break-up
Crime Alert  gathered that before the incident, Osita, a trader at Alaba International market, had on several occasions, threatened to leave an indelible mark on Onyin for dumping him for another man. Investigation revealed that the duo had a romantic relationship that lasted  for six years, a relationship that was to lead to marriage until Osita allegedly raped Onyin’s younger sister.

Family sources told Crime Alert that Oyin’s younger sister(names withheld) was sent to deliver a parcel to Osita at his 80 Isiaka street, Iba new site  two years ago. However, on reaching his apartment  he allegedly raped the teenager who was barely 15 years-old.

It was gathered that the teenager never told anyone about the deed, until she was discovered to be pregnant. She gave birth about a year ago.

Without further warning or advice,  Onyinyechukwu, stopped seeing Osita. But her action as gathered, signaled the danger that eventually led to her sudden death, following threat from Osita.

Perhaps, had she listened to her parents, this tragedy might not have befallen her. It was gathered  that right from the onset, Onyin’s parents kicked against her relationship with 36-year-old Osita who hails from Akere village in Ogbaru local government area of Anambra state.

Her devastated father, Mr Aleato, offered an explanation to the family’s stance: “ My daughter came back home one fateful day with razor  marks all over her body and when I asked what happened, she told me that she fell down. But we were later  informed by a friend of hers that her  boyfriend, Osita, inflicted the marks on her. I warned her  severally to abstain from Osita and every other man who would go to the extent of inflicting such injury on her; men who would not respect her as a woman…”

It was also gathered that Osita had on several occasions beat Onyin publicly, for calling off the relationship , only to start off with another man, boasting that if he could not have her, nobody else would.

Since the tragic incident, Osita’s whereabouts is unknown. Policemen at Ilemba Hausa  were however,  said to be on his trail. When Crime Alert visited his apartment at Iba new site, it was discovered that Osita had a wife already. Sources hinted that he rushed home that fateful night and informed some of his friends around the area about what he had done and thereafter, picked some of his clothes before disappearing into thin air. Out of fear, his close friends were also discovered to have fled, apparently to avoid being arrested by the Police.

The case, has been transferred to the State Criminal Investigation Department (SCID) where operatives at the Homicide section have reportedly began investigation.