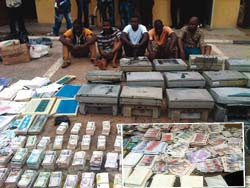 Five men were on Monday paraded by the Lagos State Police Command for printing local and foreign currencies. Two of the suspects, Femi Jacob and Ramon Adeoye, were arrested at Ogunlana Street, Alagbado with eight printing machines and a large quantity of printed fake notes in Naira, Dollars, Pounds, Euros and Cedis totalling N8m.
Isaka Usman and Akeem Ayobado were also arrested at Ikorodu with 14 printing machines, one cutting machine and N100m fake notes. The fifth suspect, Onyeka Ibe, was allegedly an Anambra-based buyer, who usually comes to Lagos to buy fake currencies.
The state Command’s Commissioner of Police, Mr. Umar Manko, said, “This syndicate has been in operation for over five years. Their customers are spread across several African countries like the Republic of Benin, Mali, Ghana, Togo, Liberia and Sierra Leone.
“The Officer-in-Charge of SARS, Superintendent of Police Abba Kyari, got a tip-off about the operations of the syndicate some weeks ago and mounted surveillance at Jacob’s Alagbado residence. It was Jacob’s confessional statement after his arrest that led to the arrest of Ayodabo who is the leader of the syndicate.
“This case will eventually be handed over to operatives of Interpol because of the negative implications the fake currencies outflow might have had on the economies of the West African countries.”
The CP said the cutting machine was owned by Ayodabo and procured from the Republic of Benin.
One of the suspects, Ibe said, “I often come down to Oluwole Street in Lagos Island. That is where Ayodabo has his shop. I would spend N5,000 to get currency worth N100,000. I usually buy currency worth between N500,000 and N700,000.”
The fake notes which were on display during the parade looked real enough to have kept the syndicate in business for five years with customers spread across the continent.
Adeoye told Punch Metro that he was arrested at Iyana Ipaja, adding, “I am just an errand boy, my duty was to deliver fake currencies to buyers. I was on my way to deliver fake notes worth N700,000 to one Ibrahim when I was arrested.” 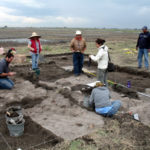