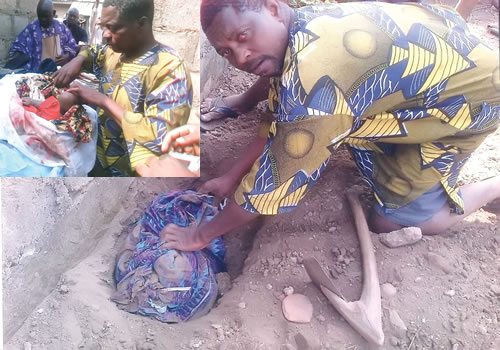 The police command in Kogi state have arrested a middle aged man, Mr Hosea Folorunsho in Egbe town of Yagba West local government council for the alleged gruesome murder of his son for ritual purpose.
Briefing journalists on the arrest in Lokoja, the Kogi state capital, the Commissioner of Police, Mr Mohammed Katsina says the suspect, a herbalist, also buried the child in a shallow grave in his own compound.
There’s a video of the report when you continue…but please be warned…it’s quite disturbing…
The state’s Commissioner of Police, Mohammed Katsina while parading the suspect, Chief Hosea Folorunsho, at the state command headquarters, Lokoja-the state capital, disclosed that on the 31st of December 2012, the herbalist killed his son for alleged ritual.
Narrating the police investigation, the police boss, Mr Katsina disclosed that on the New Year’s Eve, at about 11:55PM, the suspect quietly took the baby named Sunday Folorunsho who was asleep in the middle of the night and murdered him in gruesome circumstances.
He added that having accomplished his mission, the suspect dug a shallow grave in his compound and hurriedly buried the corpse of the baby.
The police escorted Mr Folorunsho to his compound where the baby’s corpse was buried and he was then asked to exhume the corpse.
Digging out the corpse of the baby, he handed over the body to a pathologist who conducted an autopsy on the dead baby.
The autopsy result read that the child died of multiple fractures through the application of blunt object and trauma.
The 48 year old suspect, a native of Egbe in Yagba West Local Government Area (LGA) of the state is married with three other kids.
Watch the Video below