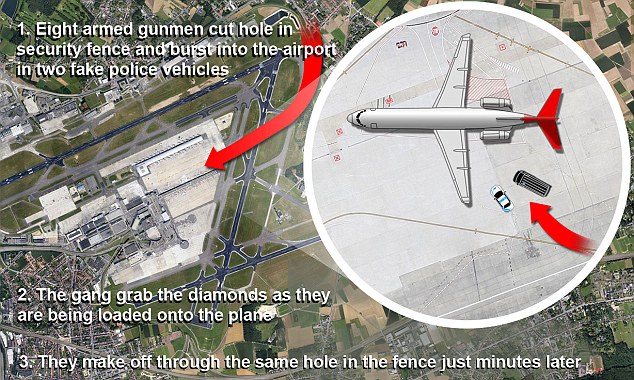 The plane waiting to take off was filled with passengers and had £32million worth of diamonds in the hold. Three minutes later the gems were gone. Not a shot was fired and the passengers were apparently unaware of the drama until their flight was cancelled minutes later.
The daring heist was carried out at Brussels airport when eight masked robbers wearing police uniforms broke through a security fence and drove on to the tarmac unchallenged in two cars with blue flashing lights.
Once inside the hold they quickly located the 120 parcels of diamonds kept in a sealed container no bigger than a shoebox.
It is understood that the gems had just been put on board. They had been brought to the airport in an armoured van which was still beside the Swiss plane during the robbery.Last night investigators had found the charred remains of the van most likely used in the heist but little else.
The gang’s remarkable efficiency led to speculation last night that it could have been an inside job.
They broke through the airport’s perimeter fence using a Mercedes and an Audi around 20 minutes before the Helvetic Airways plane bound for Zurich was due to take off at 8pm on Monday.
They made a high-speed exit through the same hole in the fence.
Because many of the diamonds were uncut, the chances of recovering them are said to be very low. They had been transported from Antwerp where eight in ten of the world’s rough diamonds are processed.