Nnanna Osondu is a young man with all the appetites of his age mates. But he would rather satisfy his sexual appetite, which he described as “large” with elderly women whom he raped.
Why? “None of these young girls around is ready to befriend me,” he claimed.
Nnanna Osondu of Opi community in Nsukka Local Government Area of Enugu State recently stunned security operatives and other inhabitants of the agrarian community when he revealed his delight in raping women far past menopause.
Osondu, said to be in his early 30s, does no serious work for a living. It was reported that he had approached several young women in the community for friendship, but none reciprocated. So, he neither has a wife nor is he courting any one at the moment.
He could not even afford the ‘luxury’ of an hour with a call girl. Still, he wanted to satisfy his sexual urge.
In meeting his desire for sex, Osondu resorted to raping elderly women whom he later claimed were better than many young girls around. But having carnal knowledge of these elderly women, many old enough to be his grandmother, did not come cheap.
Osondu reportedly scouts round the community in the day time, for his prey, and once he gets them, he goes after them at night. Since the alleged rapist could not lure these elderly women with any material item, he reportedly threatened them with a knife he usually concealed in his trousers.
Apart from threatening to kill the elderly women should they refuse him sex, Osondu also carefully selected those women who live alone in their homes.
For months now, Osondu had successfully raped about a dozen elderly women whose age averaged 60 years old. Luck, however, ran out on Osondu Tuesday, last week, when a victim rebuffed his threat to kill her and managed to raise the alarm which drew the attention of passers by. That was around 4:30p.m on a bush path in the community.
It was reported that a day before Osondu planned to carry out his crime against the fair-skinned elderly woman, he had visited the woman pretending to want to buy an item from her.
The woman was reportedly alone at the time Osondu visited her. With the knowledge of the woman going to the market the following day to get some items into her shop, the rapist traced her to the market.
But on her way from the market, he reportedly waylaid the woman at a nearby bush brandishing his knife at the woman, and then asking her for sex. The woman, identity concealed, rebuffed his death threats and started shouting at the top of her voice hoping to attract attention.
The woman soon got help from other villagers returning from the market, who surrounded Osondu and gave him some beating before he was handed over to law enforcement agents. Osondu was later transferred to the Enugu State Criminal Investigations Department where he is reportedly cooperating with the police.
When confronted with the allegation that he was using the women for rituals, Osondu denied the allegation, but claimed that he only ‘used’ the women to satisfy his sexual urge.
“It is not true that I use the women for ritual. The truth is that I have a big appetite for sex and none of these young girls around is ready to befriend me. So I resolve to going for the elderly women,” he said.
Narrating his modus operandi, alleged rapist Osondu continued, “I always get the women in the night or in the bush mostly when they were returning from the market. If anyone wanted to resist me, I only use the knife to threaten them so that they can let me have my way. I never harm them with the knife.
The truth is that young ladies in this town make life difficult for you once you do not have money to spend on them,” he said. Ebere Amaraizu, Enugu State Police Command spokesman, who confirmed the incident, thanked members of the community for apprehending the suspect.
National-Mirror 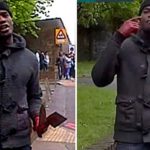