Nigeria Nigeria, new stories everyday!
The Special Offences Court in Alausa area of Ikeja, Lagos, Southwest Nigeria has sent 30 beggars who were charged to court by Lagos State Government to Kirikiri and Badagry Prisons for constituting nuisance in public by begging for alms, conducting themselves as disorderly persons without visible means of livelihood and thus committed an offence under the criminal law of Lagos State. They were also charged with conducting themselves in a manner likely to cause breach of peace and for receiving, demanding and collecting dues or unauthorised levy from persons and thus committed offence punishable under the law on illegal collection of dues in public places.
The government says it is no longer going to be business as usual as it has vowed to prosecute erring beggars on the streets of Lagos. The Attorney General of Lagos State was the prosecutor in the case. Some of the count charges against the beggars included
The beggars, 39 in number pleaded guilty to the offences and were consequently sent to Kirikiri and Badagry Prisons for one month pending when the final judgment would be delivered by the judge. Nine of them, as a result of their disabilities were rejected by prison officials and were then taken to the Lagos State Rehabilitation Home, Majidun, Ikorodu on the outskirts of Lagos.
Some of the beggars prosecuted, were said to have attacked government officials during a rampage at the Lagos State Rehabilitation Home, Majidun, the place where they were being rehabilitated. Thirteen other beggars were also arraigned on Friday by the government at the same Special Offences Court. Three of the beggars were sentenced to 72 hours community service or pay a fine of N5,000, while 10 others were sentenced to three months imprisonment or pay fine of N10,000 each. Three others were sentenced directly to 72 hours community service without an option of fine. 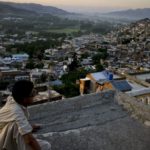