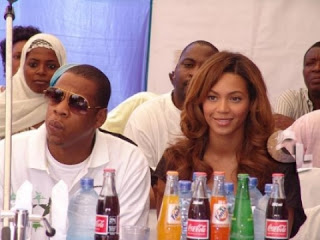 SaharaReporters has uncovered a document indicating that a million dollars of Bayelsa State’s poverty alleviation fund was spent by then Governor Goodluck Jonathan on bringing American entertainers Beyonce and Jay Z to Nigeria in 2006.

The document came to light after a controversy was ignited over how much money American “reality TV” star Kim Kardashian was paid for a brief visit to Nigeria.

In a letter stamped and signed by Bayelsa officials, N150 million (approximately a million dollars in 2006) was released from the state’s poverty alleviation fund for the first ThisDay Music Festival in Lagos. 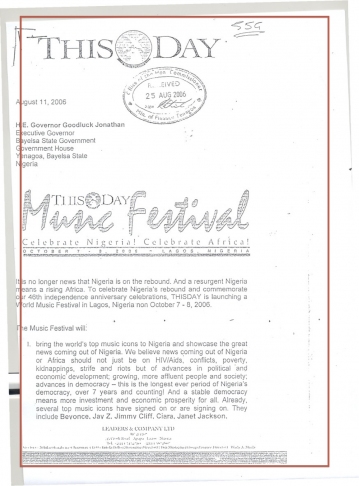 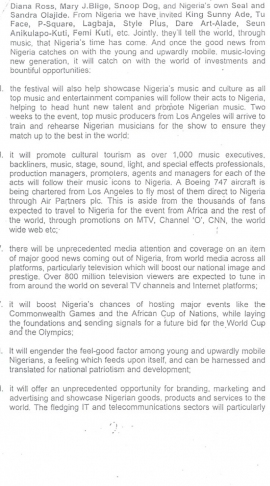 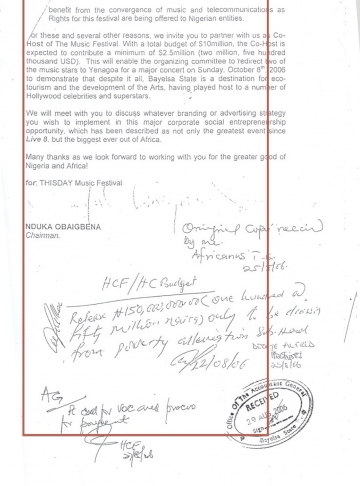 Ms. Kardashian, star of a US TV show about her idle rich family and who shot to international fame after a sex tape featuring her and her rapper boyfriend went viral, was reportedly paid half a million dollars for the 24-hour-visit last week.
The sources who provided the 2006 document for Beyonce and Jay Z’s visit told Saharareporters that there was a shady financial link between the producers of some high profile entertainment events and the governors and other officials who control budgets at the state and federal levels. Mr. Obaigbena’s newspaper, ThisDay, is a major sponsor of entertainment events that brings US music stars as well as top public figures for flying visits to Nigeria in exchange for gargantuan paychecks.
“Mr. Obaigbena often lines up financial bonanzas from numerous governors, ministers and other top government officials to finance his jamborees,” said one of the sources who is based in the UK and is knowledgeable about such deals.
SaharaReporters obtained a letter from Mr. Obaigbena to the Bayelsa State government soliciting funds from the oil-producing state ahead of Nigeria’s 46th independence celebrations in 2006. The publisher wrote, “We invite you to partner with us as co-hosts of the festival.” The letter added: “With a total budget of $10 million, the co-host is expected to contribute a minimum of $2.5 million (two million five hundred thousand USD).”
At the bottom of the letter, minuted by hand and signed by then Governor Jonathan’s aides as well as the Bayelsa State accountant general are the words, “Release N150,000,000.00 (One hundred and fifty million naira) only to be drawn from the poverty alleviation subhead.”
One source told SaharaReporters that Mr. Obaigbena sent similar letters to other south-south states.
SaharaReporters could not ascertain how much of the released funds was paid directly to performers at the festival. There is no indication that Beyonce, one of the few entertainment stars internationally famous enough to only need one name, was aware that her performance was being subsidized by the poor people of Bayelsa.
But during Beyonce’s celebrated rendition of the Nigerian national anthem, pictures of Bayelsa State were projected onto the wall of the Lagos concert venue.
According to the Nigerian Bureau of Statistics, 47% of Bayelsans live in poverty. The World Bank says that per capita gross domestic product in the Niger Delta is significantly below the country’s average. According to the state’s own 2005 development strategy, 80% of rural communities have no access to safe drinking water, a key indicator in judging poverty. In Yenagoa, the state capital and Bayelsa’s largest urban area, an estimated two out of every five residents do not have access to safe drinking water.
In 2005, as part of its UN-approved strategy to combat poverty, the state promised to make a fund of N100 million available as soft loans and micro-credit to Bayelsans. The allocated fund was N50 million less than Mr. Jonathan approved for Mr. Obaigbena’s music festival. That promise was made in the Bayelsa State Economic Empowerment and Development Strategy, published by the United Nations Development Program and signed by then Governor Diepreye Alamieyeseigha. A civil rights activist in Yenogoa told SaharaReporters that the state “has been a woeful failure in its poverty reduction program.”
The letter from Mr. Obaigbena to then-governor Goodluck Jonathan said the concert was necessary to show that the news from Nigeria was “not just…HIV/AIDS, conflicts, poverty, kidnapping, strife and riots.”
The publisher added: “This is the longest ever period of democracy in Nigeria, over seven years and counting! And a stable democracy means more investment and economic prosperity for all.”
The publisher went on to give reasons why the state government should contribute to the concert.
The stars’ performances would “tell the world, through music, that Nigeria’s time has come,” Mr. Obaigbena wrote. The letter added, “And once the good news catches on with the young and upwardly mobile, music loving new generation it will catch on with the world of investments and bountiful opportunities.”
In 2006, Mr. Goodluck Jonathan had just become governor of Bayelsa after his boss, Diepreye Alamieyeseigha, was impeached and convicted on corruption charges.  Mr. Jonathan was then elevated to Vice President to then President Umaru Yar’Adua. Mr. Yar’Adua’s death in 2010 enabled Mr. Jonathan, a zoologist whose PhD focused on tropical fish, to assume the presidency.
Since 2006, Mr. Obaigbena’s parent company, Leaders & Company, has produced a number of high-profile events that have seen such American stars as Rihanna, R Kelly, and Usher perform for Nigerians. The ticket prices for these concerts are usually out of reach of the “average” Nigerian. The events feature tickets that cost many tens of thousands of naira, usually reserved for “VIP access.” ThisDay has also hosted political luminaries like former US President Bill Clinton and former economic adviser to the Obama presidency, Lawrence Summers. At an Africa Rising concert in London, former US Secretary of State Colin Powell came on stage and danced to the popular Naija jam “Yahooze” by Olu Maintain.