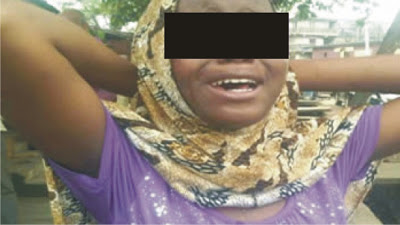 A middle-age woman alleged to have been serially raped by four men while in police custody in Abraka, Delta State, has petitioned the Assistant Inspector General of Police, Zone 5, Benin, accusing the Divisional Police Officer, DPO, and his men of negligence and failure to protect her.
She disclosed that efforts made by her husband to effect her bail was rebuffed by the DPO and DCO, who apart from intimidating and abusing her husband, pushed him out of the police station…
The petition by counsel to the woman, Mr. Ejomasuvwe Efe, stated that following a fight between her and her neighbour, policemen from Abraka Police Station came to arrest her following a complaint from one Mama Afoke who she had altercation with.
The petition said: “Shortly after Mr. Isaiah left the Abraka Police Station, the Police IPO instructed the Police man at the counter to take his wife to the police cell and delivered her into a cell where there were already two men.
“As soon as the Police locked the gate to the cell, two young boys came into the cell where the woman and the other two mature men were kept, and immediately they started touching her indecently despite her protests that she was a married woman and mother of five children.
“The boys asked her to keep quiet and immediately grabbed her by her neck and gagged her with their hands while the others held her two hands and threw her violently on the floor and started to r**pe her.
“In the process, she started shouting but the policemen refused to come to her aid until she went into a coma. She only came around the following morning”.
She added that when she became conscious, she noticed that her husband was inside the cell opposite where she was held, adding that when she asked him what he was doing there, her husband replied that when he came that morning to effect her bail, the police pushed him into the cell for ever asking for her bail.
Mrs. Isaiah informed the AIG that when her husband confronted the DPO and DCO about his wife’s allegedly r*ped and kept in the same cell with men, the DCO ordered that he should be kept behind the counter.
She was later taken to the Abraka Government hospital where a doctor who treated her confirmed that she was r*ped, she alleged that the IPO begged her not to tell people about the doctor’s verdict.
“After our client was discharged from the hospital, one Mr. Kobina Enamuotor who is the father of one of the rapist, Akpevwe and one Mr. Okotie whose son was also involved in the r*pe, together with the woman IPO and two other police men went to the family of our client begging for settlement and they offered to pay damages of N120,000 to the family.
“Meanwhile, the DPO of Abraka Police Station seeing the seriousness of the offence and the negligence of himself and his men, refused to take any meaningful action and wanting to cover it up, before well wishers started protesting and sending text messages to the Commissioner of Police which led to the transfer of the case to Asaba”, the petitioner said.
She alleged that in Asaba the IPO who was detailed to handle the case started to intimidate her husband and him that if they did not hands off the case, some thing more dangerous will happen to them since the Assistant Commissioner of Police in Asaba was interested in the case and was ready to deal ruthlessly with them.
“Our clients are in a serious trauma and cry for justice with firm instruction to demand and we hereby demand that the AIG should use his good office and detail well spirited policemen from his office in Benin to carry out discrete investigation into this heinous crime at the Abraka police Station. Mama Afoke and the rapists involved brought to book.”
Source: Vanguard

Man Arrested For Killing His Father After Church Prophecy