Since these people are in tech, we’re guessing it’s been years since any of them hand-wrote notes. As a result we have to use signatures we’ve found through various online sources. With Bill Gates, Microsoft’s chairman, what you see is what you get  Lowe: “Bill Gates takes the time to write a clear, clean, unpretentious signature that says, ‘What you see is what you get.’ There are signs of quick thinking, but the round dot over the ‘i’ says he’s patient with details. He’s willing to take the time to listen…..Continue
Jack Dorsey, founder of Twitter and CEO of Square’s, “@” signature is about saying “who I am is what I do”

Jack Dorsey has two signatures we’ve seen online. This one plays on his Twitter founding. Lowe’s take on this: “Jack Dorsey’s extremely simplified signature drops his last name and with the @ symbol, identifies him with what he does (‘who I am is what I do’). The k ends with a downward trail. If that’s how he normally signs, it may signify a desire to continually look back at the past and figure out how to benefit from his experiences, or to figure out how he got where he is now.” Jack Dorsey’s more formal signature shows he’s a bottom line kind of guy

Here’s another Dorsey signature we found that’s more formal. Says Lowe, “This is more his public persona. This one is a logo-type signature, which happens to be easy to forge in its lack of complexity. It’s another case of illegibility that allows the writer to hide anything he doesn’t want the world to see. He’s a bottom line kind of guy, impatient and with that strong ending stroke, aggressive.”

Lowe: “Jeff Bezos’ first name leans left before moving rightward with his last name, which is not completely legible and ends in a dynamic movement upward. Despite the fact that he might have a lot to say (notice the open “o” in his last name), he’s not as outgoing as he would like us to think he is, but we would need to see more handwriting to figure out why. That final stroke is somewhat aggressive and acts as a wall to keep others out.”

Tim Cook also has two signatures online. This one, found on Wikipedia, is his sloppier signature. Says Lowe of this one, “Tim Cook has a signature that resembles some sort of alien hieroglyphic. Since a signature is written for the purpose of communicating who you are, we can assume that Tim doesn’t want us to know much about him. What we can see, however, is that his mind is moving faster than he can write. He gets to the bottom line at warp speed and isn’t interested in hearing all the mundane details. If you come to him with a plan, make sure you’ve done your homework.”

We also found this Cook signature, which was on a check for developers. Says Lowe of this one, “He probably felt the need to be clearer, knowing his signature would be seen on this rather large check, so took more time with it. We don’t know which is his “normal” signature—probably the other one. This one has a very large ‘C’ in the last name—his father’s name—so there’s respect or regard for his family of origin.”

Lowe: “Steve Ballmer’s signature is interesting for a couple of reasons. First, he crosses the ‘t’ in Stephen far to the right, indicating forward-looking enthusiasm. Second, the ll in Ballmer has a rather strange shape that reaches into the stratosphere and make me wonder if he’s a pilot. We see this type of formation in people who have a great deal of pride in their accomplishments. He wants to be seen as an intellectual, which may lead him to make things sound a lot more complicated than they really are. He sets his own standards and has less interest in what others think.”

Google co-founder Sergey Brin’s signature suggests he wants to be known as Sergey, not Mr. Brin

Lowe: “Sergey Brin’s somewhat sloppy signature is at least readable. He wrote it quickly, not paying much attention to the details—there’s no dot over his i. He has a sociable, casual approach, and with the capital S being taller than the capital B, he would rather be seen as ‘Sergey,’ than ‘Mr. Brin.’”

Lowe: “Larry Page just throws his clear signature down on the paper and doesn’t care what others think. The vowel letters are wide open, which suggests he is a good listener. However, the wide space between first and last name indicates the need for a wide berth of personal space. Don’t stand too close when you speak to him.”

Lowe: “Mark Zuckerberg apparently doesn’t feel the need to share more than just his initials. True, it’s a long name to write, but anyone not knowing what the name says, would find it impossible to guess. He is definitely the man behind the curtain, pulling the strings in the background.”

Once Apple’s co-founder Steve Jobs started going, there was no stopping him

Lowe: “Steve Jobs wrote with a thick marker pen (like his black turtlenecks) and didn’t capitalize his signature. This points to humility, at least in the way he felt about himself, if not his work. The low upper loop indicate someone down to earth, whose focus was on the here and now. The t cross stays mostly to the left of the downstroke, and apart from the capitals, there are no breaks between the letters. He might have needed a second cup of coffee to really get going, but once he did, he was a steamroller who never stopped until he had finished what he started.” 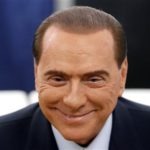